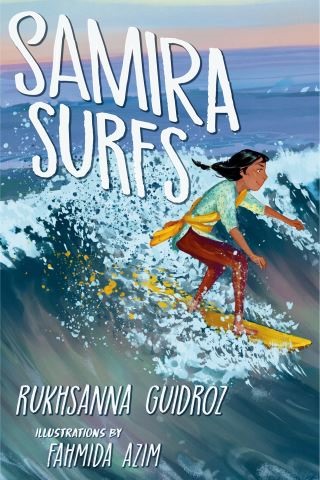 A middle grade novel in verse about Samira, an eleven-year-old Rohingya refugee living in Cox's Bazar, Bangladesh, who finds strength and sisterhood in a local surf club for girls.

Samira Surfs, written by Rukhsanna Guidroz with illustrations by Fahmida Azim, is a tender novel in verse about a young Rohingya girl's journey from isolation and persecution to sisterhood, and from fear to power.

Rukhsanna Guidroz: Rukhsanna Guidroz is the author of Mina vs. the Monsoon and Leila in Saffron. She studied French at King's College, London, and political science at the Sorbonne, Paris, before living and working in Hong Kong as a journalist. After becoming a mother, Rukhsanna began her teaching career, working with students from kindergarten to high school. She now lives in Maui, Hawaii where she's taken up surfing. Learn more about her at www.rukhsannaguidroz.com.

Fahmida Azim is an illustrator, author, and tea drinker. She immigrated to the United States from Bangladesh as a child and grew up in northern Virginia, graduating with a BFA in Communication Arts from VCUarts. Her art frequently addresses the themes of identity, culture, and autonomy and has been featured in the New York Times, NPR, and Vice. Fahmida now lives and works in Seattle. Learn more about her at https://fahmida-azim.com/.