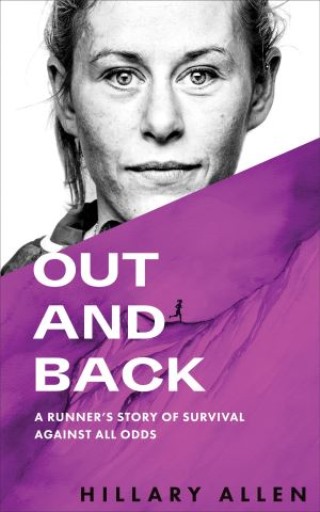 In 2017, world-class ultrarunner Hillary Allen was ranked #1 in the world sky running series when she fell 150 feet off a mountain ridge, breaking multiple bones and suffering a life-altering blow to her body and athletic career. Out and Back recounts Allen's fight to rehabilitate her body, rebuild her belief in herself, and return to the life and sport she loves.

Ultramarathon runner and North Face-sponsored athlete Hillary Athlete felt like she was on top of the world in 2017 as she competed in Norway's Tromsø Skyrace. Then, nearly halfway through the 50-kilometer race, Allen fell 150 feet off an exposed cliff ridge, fracturing her back and breaking multiple ribs, both feet, and both of her lower arms. Beginning with the dramatic story of her nearly-fatal accident and remarkable rescue, Out and Back chronicles Allen's incredible road to recovery and how she navigated the physical and mental health hurdles along the way.

With vulnerability that reveals remarkable courage, Allen's memoir is a powerful reminder that no matter what setbacks you face in life—injuries, break-ups, job losses, rejections—you have strength inside that you never knew existed. Out and Back is an amazing story of resilience that shows how someone can nearly lose everything and then work hard to heal and come out stronger on the other side. Today, Allen sees her 150-feet fall not as an accident, but as a moment of enlightenment that allowed her to reevaluate her entire life, see the beauty and importance of community, and fall back in love with nature and the reasons she started running in the first place.

Allen's story teaches you that the path forward is not always linear, that healing takes time, and that the process of rediscovery is ongoing as you reach within and find what it takes to survive—and thrive. Out and Back is an inspiring read for anyone who wants to bet big on themselves, learn how to live fearlessly, and build the courage to reclaim your life, one day at a time.

Hillary Allen: Hillary Allen is from Fort Collins, Colorado. She grew up in an outdoorsy and scientific family who not only encouraged her to pursue a career in science but also in sport. She earned a master's degree in neuroscience and physiology and structural biology from the University of Colorado. During her graduate studies, Hillary also discovered trail running and ultra-running. Her passion for the outdoors quickly led to success on the trails where she became a sponsored mountain runner for The North Face. Along with her professional running and racing career, Hillary also teaches chemistry, biology, anatomy and physiology part-time at a small college outside of Boulder, Colorado. She also coaches other runners, again using her love of athletics and her physiology background.