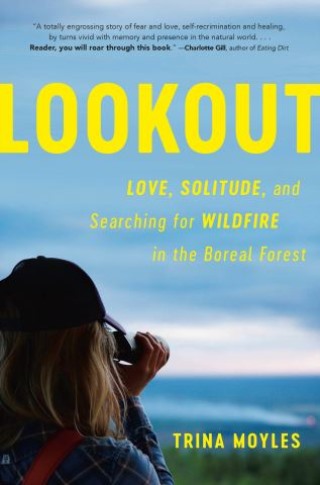 Love, Solitude, and Searching for Wildfire in the Boreal Forest

A page-turning memoir about a young woman's grueling, revelatory summers working alone in a remote lookout tower and her eyewitness account of the increasingly unpredictable nature of wildfire in the Canadian north.

While growing up in Peace River, Alberta, Trina Moyles heard many stories of Lookout Observers--strange, eccentric types who spent five-month summers alone, climbing 100-foot high towers and watching for signs of fire in the surrounding boreal forest. How could you isolate yourself for that long? she wondered. "I could never do it," she told herself.
Craving a deeper sense of purpose, she left northern Alberta to pursue a decade-long career in global humanitarian work. After three years in East Africa, and newly engaged, Trina returned to Peace River with a plan to sponsor her fiance, Akello's, immigration to Canada. Despite her fear of being alone in the woods, she applied for a seasonal lookout position and got the job.
Thus begins Trina's first summer as one of a handful of lookouts scattered throughout Alberta, with only a farm dog, Holly--labeled "a domesticated wolf" by her former owners--to keep her company. While searching for smoke, Trina unravels under the pressure of a long-distance relationship--and a dawning awareness of the environmental crisis that climate change is producing in the boreal. Through megafires, lightning storms, and stunning encounters with wildlife, she learns to survive at the fire tower by forging deep connections with nature and with an extraordinary community of people dedicated to wildfire detection and combat. In isolation, she discovers a kind of self-awareness--and freedom--that only solitude can deliver. Lookout is a riveting story of loss, transformation, and belonging to oneself, layered with an eyewitness account of the destructive and regenerative power of wildfire in our northern forests.

Trina Moyles: TRINA MOYLES is a writer, photographer, potter, and seasonal smoke spotter in the northern boreal. She is the author of Women Who Dig: Farming, Feminism, and the Fight to Feed the World. Her award-winning writing has been published in The Globe and Mail, The Walrus, Alberta Views, Maisonneuve, Hakai Magazine, and many other publications. She lives, writes, and adventures in northwestern Alberta with her canine sidekick, Holly.