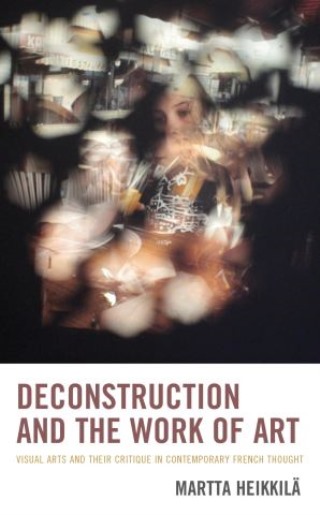 Deconstruction and the Work of Art

Visual Arts and Their Critique in Contemporary French Thought

The contemporary idea of the “work of art” is paradoxically both widely used and often unexamined. Therefore, we must re-evaluate the concept before we can understand what the deconstruction of aesthetics means for thinkers like Jacques Derrida, Jean-Luc Nancy, and Philippe Lacoue-Labarthe. By examining their analyses of works of visual art and contextualizing their thinking on the matter, Martta Heikkilä asserts that the implications of the “work of art,” “art,” and “the aesthetic” apply not only to philosophical questions but also to a broader area. Instead of the totality represented by the historical concept of Art, poststructuralist thinkers introduce the idea of the radical multiplicity of art and its works. From this notion arises the fundamental issue in Derrida and the poststructuralist tradition: how can we speak philosophically of art, which always exists as singular instances, as works? In Deconstruction and the Work of Art: Visual Arts and Their Critique in Contemporary French Thought, Heikkilä shows that the deconstructionist notions of art are still influential in the discourses of contemporary art, in which artworks proliferate and the concept of “work” is open-ended and expanding. This book offers an introduction to the deconstructionist theory of art and brings new perspectives to the complex, undecidable relation between philosophy and art.

Martta Heikkilä is adjunct professor of aesthetics at the University of Helsinki.