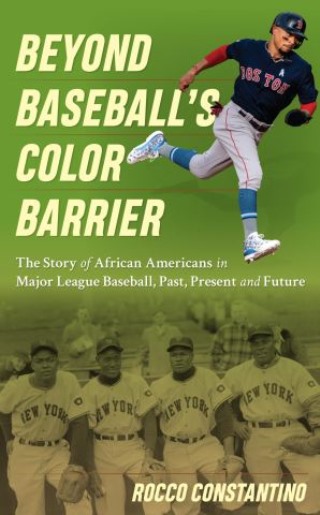 The Story of African Americans in Major League Baseball, Past, Present, and Future

A fascinating history celebrating Black players in Major League Baseball from the 1800s through today, with special insight into what the future may hold.

In Beyond Baseball's Color Barrier: The Story of African Americans in Major League Baseball, Past, Present, and Future, Rocco Constantino chronicles the history of generations of ballplayers, showing how African Americans have influenced baseball from the 1800s to the present. He details how the color line was drawn, efforts made to erode it, and the progress towards Jackie Robinson’s debut—including a pre-integration survey in which players unanimously promoted integration years before it actually happened. Personal accounts and colorful stories trace the exponential growth of diversity in the sport since integration, from a boom in participation in the 1970s to peak participation in the early 1990s, but also reveal the current downward trend in the number of African American players to percentages not seen since the 1960s.

Beyond Baseball's Color Barrier not only explores the stories of icons like Hank Aaron, Willie Mays and Satchel Paige but also considers contributions made by players like Vida Blue, Mudcat Grant and Dwight Gooden. Exclusive interviews with former players and individuals involved in the game, including the President of the Negro Leagues Baseball Museum, add first-hand expert insight into the history of the topic and what the future holds.

Rocco Constantinois the director of athletics at Santa Barbara City College and a sports historian. He is the co-founder and lead baseball writer for BallNine.com and has written for many national online media outlets, including Bleacher Report, Baseball Hot Corner, America Online, and multiple collegiate athletics official websites. Constantino’s first book, 50 Moments That Defined Major League Baseball, was published by Rowman & Littlefield and was named among Sports Collectors Digest’s best baseball books of 2016. Constantino resides in Santa Barbara, California.