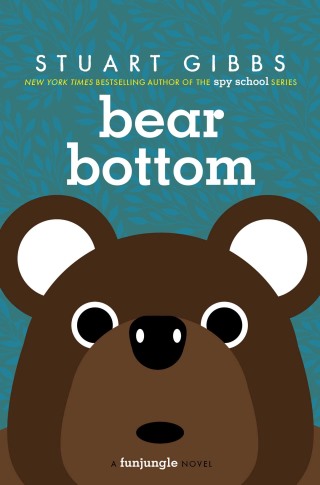 Teddy Fitzroy, his family, and some other FunJungle employees have been invited to visit a bison ranch just outside Yellowstone National Park that FunJungle’s owner, J.J. McCracken, is considering purchasing. But as usual, trouble isn’t far behind.

The ranch’s endangered bison have been mysteriously disappearing. Then a massive local grizzly bear named Sasquatch breaks into the house, causing chaos. In the aftermath, Kandace McCracken discovers that her exceptionally expensive sapphire necklace has vanished.

Was it stolen? Or did Sasquatch eat it? (And if so, can it be recovered?) And what’s been happening to the bison?

With over a dozen suspects, it’s up to Teddy to detangle this hairy situation, before his family or friends—or any more expensive objects—become dinner.

Stuart Gibbs: Stuart Gibbs is the New York Times bestselling author of Charlie Thorne and the Last Equation, Charlie Thorne and the Lost City, and the FunJungle, Moon Base Alpha, and Spy School series. He has written screenplays, worked on a whole bunch of animated films, developed TV shows, been a newspaper columnist and researched capybaras (the world’s largest rodents). Stuart lives with his family in Los Angeles. You can learn more about what he’s up to at StuartGibbs.com.