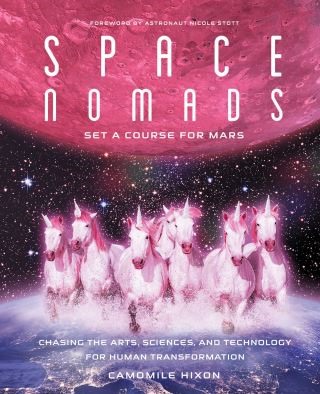 Chasing the Arts, Sciences, and Technology for Human Transformation

Transform Your Mind. Expand Your Universe. Reach for Mars.

Imagine a better tomorrow with interstellar essays and art—drawing on the aspirational futurism that fuels Star Trek, The Martian, and 2001: A Space Odyssey, renowned contemporary artist Camomile Hixon reminds us that by reaching for the stars, we can chase our full potential beyond Earth, while also transforming ourselves and our understanding of the Pale Blue Dot we call home.

We stand at the threshold of interplanetary travel: SpaceX rockets are now routinely leaving Earth and NASA’s new Perseverance rover is searching for signs of ancient life on the Red Planet. Not since the moon landing in 1969 has space—or the promise of a transformational future for humankind—felt so close. Do we dare to reach for it?

Yearning to know the stars has long united humanity and ignited our imaginations. And while here on Earth we grapple with deep unrest—economic struggle, political upheaval, gender discrimination, pandemics, racial tensions, climate change—the potential of a colony on Mars has sparked a new, universal hope and a heightened sense of collective purpose as we discover our ultimate destiny beyond Earth’s orbit.

Celebrating the limitless potential of space and the human spirit, Hixon’s indelible essays and fantastical works of art invite us to imagine a transcendent future where we reach together for absolute freedom, unconditional love, and wellness on our grand quest for world peace.

Weaving science, history, art, and philosophy with meditations on higher consciousness inspired by seeing the Earth from Space, Space Nomads is a book of unbridled optimism for the future.

Camomile Hixon: New York City visual artist Camomile Hixon chases the unicorns of infinite possibility to build new worlds. She believes that by reaching for Mars humanity can create a mindset that rises above its earthbound shortcomings. This transformational shift to a universal paradigm will bring deeper human relationships, greater love, and the unity that is rightfully ours.

Hixon communicates this message through various art forms including music. Her glitter paintings have been exhibited at Tokyo Japan’s Shibuya Subway Terminal, New York City’s Oculus Transportation Hub at the World Trade Center, as well as concurrent shows at the 57th and 58thVenice Biennal. Her Love from Mars painting was exhibited on 130 digital kiosks across New York City. Camomile’s virtual, interactive worldwide Search for the Missing Unicorn has included millions of people and been covered by major media outlets including MSNBC, the BBC, and the CBC among others. Museum shows include the American Textile History Museum, Cornell Art Museum, and the Lyman Allyn Art Museum. Hixon’s works are held in public and private collections worldwide. Visit her on Instagram @CamomileHixon or at CamomileHixon.com.