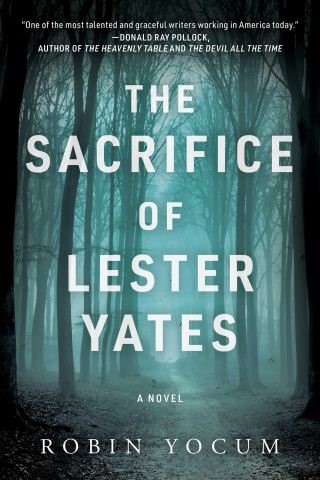 The Sacrifice of Lester Yates

A new political thriller from the author of bestselling novel The Essay.

Lester Yates is the notorious Egypt Valley Strangler, one of the country’s most prolific serial killers. Or, is he? Yates is two months from his date with the executioner when Ohio Attorney General Hutch Van Buren is presented with evidence that could exonerate him. But Yates is a political pawn, and forces exist that don’t want him exonerated, regardless of the evidence. To do so could derail presidential aspirations and change the national political landscape. Yates’ execution will clear a wide political path for many influential people, including Van Buren, who must battle both the clock and a political machine of which he is a part.

Robin Yocum has been compared with E. Annie Proulx for his authenticity of place, and Elmore Leonard for his well-laid plots and perfect pacing. Arcade is thrilled to publish The Sacrifice of Lester Yates, which is Yocum at his best: suspenseful, political, and smart.

Robin Yocum: An award-winning former crime reporter with the Columbus Dispatch, Robin Yocum has published two true crime books and five critically acclaimed novels. A Brilliant Death was a finalist for both the 2017 Edgar and the Silver Falchion for best adult mystery. Favorite Sons was named the 2011 Book of the Year for Mystery/Suspense by USA Book News. His short story, The Last Hit, was selected for Best American Mystery Stories 2020. He grew up in the Ohio River village of Brilliant and is a graduate of Bowling Green State University, where he received a degree in journalism, which kept him out of the steel mills and prevented an untimely and fiery death.