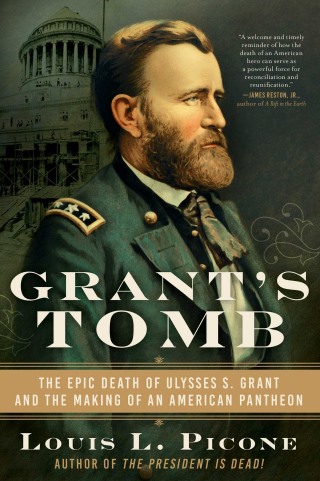 The Epic Death of Ulysses S. Grant and the Making of an American Pantheon

The moving story of Ulysses S. Grant's final battle, and the definitive account of the national memorial honoring him as one of America's most enduring heroes

The final resting place of Ulysses S. Grant, the victorious general in the Civil War and the eighteenth president of the United States, is a colossal neoclassical tomb located in the most dynamic city in the country. It is larger than the final resting place of any other president or any other person in America. Since its creation, the popularity and condition of this monument, built to honor the man and what he represented to a grateful nation at the time of his death, a mere twenty years after the end of the Civil War, have reflected not only Grant's legacy in the public mind but also the state of New York City and of the Union.

In this fascinating, deeply researched book, presidential historian Louis L. Picone recounts the full story. He begins with Grant's heroic final battle during the last year of his life, to complete his memoirs in order to secure his family's financial future while contending with painful, incurable cancer. Grant accomplished this just days before his death, and his memoirs, published by Mark Twain, became a bestseller. Accompanying his account with numerous period photographs, Picone narrates the national response to Grant's passing and how his tomb came to be: the intense competition to be the resting place for Grant's remains, the origins of the memorial and its design, the struggle to finance and build it over the course of twelve years, and the vicissitudes of its afterlife in the history of the nation up to recent times.

Louis L. Picone: Louis L. Picone is the award-winning author of The President Is Dead! The Extraordinary Stories of the Presidential Deaths, Final Days, Burials, and Beyond and Where the Presidents Were Born: The History and Preservation of the Presidential Birthplaces. He holds a master's in History and teaches American history at William Paterson University in Wayne, New Jersey. Louis is a member of the Authors Guild, Mensa International, and the American Historical Association. He is also a trustee on the board of the Grover Cleveland Birthplace Memorial Association in Caldwell, New Jersey. Louis has spoken widely on the topic of the presidents and the places we commemorate them, including at the Grover Cleveland Birthplace State Historic Site, Morristown National Historical Park, James A. Garfield National Historic Site, and the June 2016 international conference "U.S. Presidents and Russian Rulers" at the Russian Academy of Sciences in Moscow. He lives in Succasunna, New Jersey.