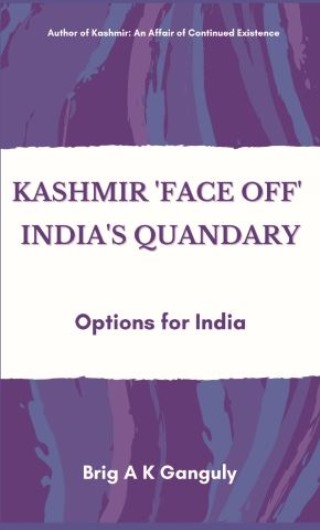 The book ‘Kashmir Face-Off India’s Quandary’ is about Kashmir. How it remained in the suspended, animated state since 1947 in three parts Pakistan Occupied Kashmir, China Occupied Kashmir and rightfully held Indian Jammu and Kashmir. So many years have passed in status quo state and none of the actors is ready to budge an inch. The legal status of Jammu and Kashmir (J&K) as per the documentary evidence and seconded by the British Empire, the day the Maharaja of the State signed the Accord of Accession in 1947 October. This had made both Pakistan and China not recognising the accord. Pakistan invaded India to take by force J&K, Indian Army drove out the invading forces, but as ceasefire came into being certain territories were still held by Pakistan. Same was the case with China who in 1962 captured Aksai Chen and never returned it to India. These occupied territories were and have been used in fermenting problems and instability, based on communal lines with a view to breakaway Kashmir from India. With the abrogation of special status which Pakistan and China have been exploiting, both these countries got the jolt which they were never expecting. It was for the first time India declared the occupied territories as part of India in August 2019 and put the reclamation of the same. In this book, the modus, modalities and way out have been discussed to get back all the occupied territories, even at the cost of going in for forced reclamation. The narrative has been made interesting with Maps and debating the pros and cons, where India stands and what it must do to improving its posturing of reclamations.

A K Ganguly: Brigadier Ashok Ganguly is presently holding a senior management position in Corporate and had been engaged as General Manager, Administration and Support Services for over ten years. He is currently engaged in consultancy services of Corporate Administrative Management. Brigadier Ashok Ganguly, SM, VSM (Retd) had put in 34 years of military service. An Infantry officer, who has successfully commanded Infantry Battalion and Sector of Rashtriya Rifle (Brigade) in highly intensive counter-insurgency sectors of Jammu & Kashmir. He is having three decades of experience and number of exposures in military operations in North East India, Punjab, Jammu & Kashmir and High Altitude Sectors of Northern and Eastern India. He had been in staff of General Staff (Operations) and Operational Logistics & Administration at various operational formations at Divisional, Corps and Army Command levels. He is a recipient of Sena Medal (SM), Vishist Seva Medal (VSM) and Commendations for distinguished service in operations and staff duties. Masters in Defence Studies from Madras University, Post Graduate of Defence Services Staff College, MBA and Masters Diploma in HR&IR. He is a prolific writer and has been contributing articles in various magazines; he has authored books on leadership and personality development titled ‘Leaders from the Barracks’ published in 2016, military professionalism titled ‘Generalship: All That Really Matters’ published in 2018 and on the issue of Kashmir titled ‘Kashmir: An Affair of Continued Existence’ published in 2019 and on self-development ‘Managing Inner Conflicts in Professional Life’ in 2020. This is his fifth book. His lectures, speech and presentations are well received in various institutions on leadership, self-development, national strategic and military issues and human resource management. The author’s email is gangulees@yahoo.co.in