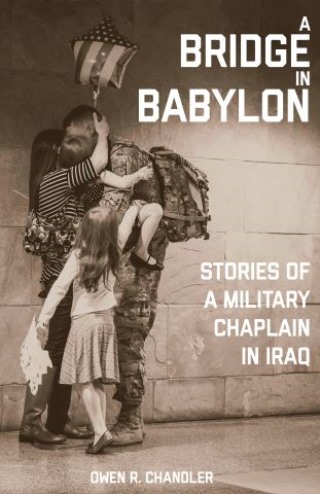 A Bridge in Babylon

Stories of a Military Chaplain in Iraq

Army chaplain Owen Chandler takes us to the battlefields of Iraq in this gripping spiritual memoir of war, love, family, church and God. As an Arizona Army National Reservist, Rev. Chandler was deployed to Iraq as chaplain of the 336th Combat Sustainment Support Battalion, leaving behind his wife, three young children, and a congregation for more than a year. In this honest and eloquent memoir, Chandler shares his story of serving as an “embedded presence of hope” in Iraq through personal letters, journal entries, scriptures and photos exchanged with family back home. Expanding far beyond the military chaplain caricature of M*A*S*H’s Father Francis Mulcahy, Chandler reflects on the brutal realities of war, his fellow soldiers, and the families waiting for them all to come home. He shares the struggle to hold onto faith and hope in the midst of battlefields, opening readers’ hearts to the challenges of military chaplaincy and the plight of veterans shattered by their experiences. A Bridge to Babylon inspires readers and provide tools to create bridges to our veterans, especially Reserve soldiers with shockingly high rates of suicide and substance abuse.

Owen R. Chandler: Owen R. Chandler is an active duty army chaplain. Previously, he served as a congregational minister for fourteen years within the Christian Church (Disciples of Christ) denomination. He pastored his beloved Saguaro Christian Church, an open & affirming faith community in Tucson, Arizona, for eight years. Concurrently, he served as an army reserve chaplain for nine years, deploying to Iraq in 2016.While in Tucson, Owen also founded the nonprofit, Sol Food Initiatives, a community kitchen that alleviates hunger, fosters nonprofit collaborations, and cultivates community. He earned an Army Bronze Star (2016) and 40 Under 40 from Arizona Daily Star (2019). Whether in the pulpit or in his duty uniform, Owen’s ministerial emphasis centers on discovering the healing, transformative power of the intersections between our story and God’s love. Most important to Owen’s story, he is a husband and father of three. When there is free time, he plays ukulele, obsesses over the NBA, and enjoys the outdoors with lots and lots of sunscreen.