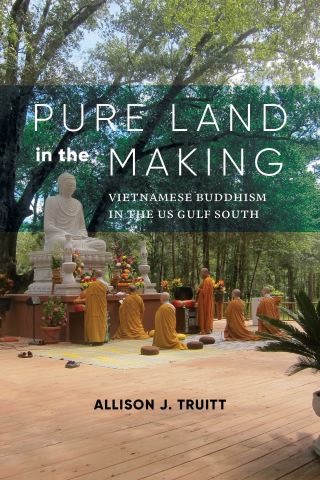 Pure Land in the Making

Vietnamese Buddhism in the US Gulf South

Since the 1970s, tens of thousands of Vietnamese immigrants have settled in Louisiana, Florida, and other Gulf Coast states, rebuilding lives that were upended by the wars in Indochina. For many, their faith has been an essential source of community and hope. But how have their experiences as migrants influenced their religious practices and interpretations of Buddhist tenets? And how has organized religion shaped their understanding of what it means to be Vietnamese in the United States?

This ethnographic study follows the monks and lay members of temples in the Gulf Coast region who practice Pure Land Buddhism, which is prevalent in East Asia but in the United States is less familiar than forms such as Zen. By treating the temple as a site to be made and remade, Vietnamese Americans have developed approaches that sometimes contradict fundamental Buddhist principles of nonattachment. This book considers the adaptation of Buddhist practices to fit American cultural contexts, from temple fundraising drives to the rebranding of the Vu Lan festival as Vietnamese Mother’s Day. It also reveals the vital role these faith communities have played in helping Vietnamese Americans navigate challenges from racial discrimination to Hurricane Katrina.

Allison J. Truitt is associate professor of anthropology at Tulane University and author of Dreaming of Money in Ho Chi Minh City.