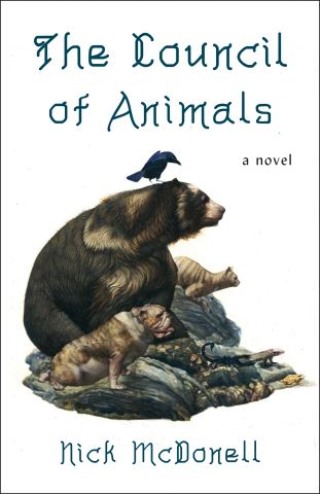 The Council of Animals

From national bestselling author Nick McDonell, The Council of Animals is a captivating fable for humans of all ages—dreamers and cynics alike—who believe (if nothing else) in the power of timeless storytelling.

“‘Now,’ continued the cat, ‘there is nothing more difficult than changing an animal’s mind. But I will say, in case I can change yours: humans are more useful to us outside our bellies than in.’”

After The Calamity, the animals thought the humans had managed to do themselves in. But, it turns out, a few are cowering in makeshift villages. So the animals—among them a cat, a dog, a crow, a baboon, a horse, and a bear—have convened to debate whether to help the last human stragglers . . . or to eat them.

Rest assured, there is a happy ending. Sort of.

Nick McDonell: Nick McDonell, born in 1984, is a writer of novels, journalism, and political theory. He studied literature at Harvard and international relations at St. Anthony’s College, Oxford. His fiction has been published in twenty-two languages and appeared on bestseller lists around the world. A film adaptation of his first novel, Twelve, premiered at the Sundance Film Festival. His academic work on nomadism—The Civilization of Perpetual Movement—was published in 2016. As a reporter for the London Review of Books, Time, TheNewYorker.com, and Harper’s, Nick has embedded with the United States Army and Marines, the Afghan Special Forces, the African Union Mission to Darfur, and the Iraqi Special Forces. Nick’s book, The Bodies in Person: An Account of Civilian Casualties in American Wars, was published in 2018. Nick is a cofounder of the Zomia Center for the Study of Non-State Spaces, which supports scholarly and humanitarian projects around the world.