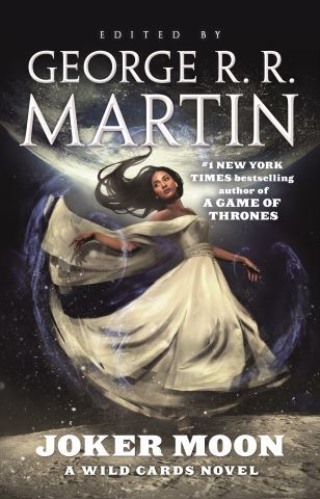 In Joker Moon, the next Wild Cards adventure from series editor George R. R. Martin, we follow Aarti, the Moon Maid, who can astrally project herself onto the surface of the moon and paint projections across the lunarscape.

Theodorus was a dreamer.

As a child, he dreamt of airplanes, rockets, and outer space. When the wild card virus touched him and transformed him into a monstrous snail centaur weighing several tons, his boyhood dreams seemed out of reach, but a Witherspoon is not so easily defeated. Years and decades passed, and Theodorus grew to maturity and came into his fortune . . . but still his dream endured.

But now when he looked upward into the night sky, he saw more than just the moon . . . he saw a joker homeland, a refuge where the outcast children of the wild card could make a place of their own, safe from hate and harm. An impossible dream, some said. Others, alarmed by the prospect, brought all their power to bear to oppose him. Theodorus persisted . . .

. . . never dreaming that the Moon was already inhabited. And the Moon Maid did not want company.

George R. R. Martin: George R. R. Martin has been a full-time writer for over 25 years. He is the author of the acclaimed, internationally bestselling fantasy series A Song of Ice and Fire, which is the basis of HBO's popular Game of Thrones television series. Martin has won multiple science fiction awards, including 4 Hugos, 2 Nebulas, the Bram Stoker, the Locus Award, the World Fantasy Award, the Daedelus, the Balrog, and the Daikon (Japanese Hugo).