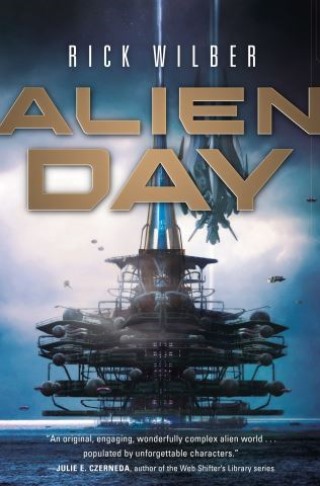 Set on a near-future Earth and on the alien homeworld of S’hudon, Rick Wilber's Alien Day explores murderous sibling rivalries, old-school mercantile colonialism, ambition, greed, and the saving strength that can emerge from reluctant heroes called to do the right thing despite the odds.

Will Peter Holman rescue his sister Kait, or will she be the one to rescue him? Will Chloe Cary revive her acting career with the help of the princeling Treble, or will the insurgents take both their lives? Will Whistle or Twoclicks wind up in charge of Earth, and how will the Mother, who runs all of S’hudon, choose between them? And the most important question of all: who are the Old Ones that left all that technology behind for the S’hudonni . . . and what if they come back?

“His Intricate and ingenious storytelling will pull you in, and then the humanity and vulnerability of his characters will break your heart.” —Alan Smale, Sidewise award-winning author of the Clash of Eagles trilogy

Rick Wilber: RICK WILBER is an award-winning writer and editor who has published a half-dozen novels and short-story collections, several college textbooks on writing and the mass media, and more than fifty short stories in major markets, including several published in Asimov’s Science Fiction magazine that are set in the same near-future as Alien Day. He has won the Sidewise Award for Alternate History for the story, “Something Real,” and his previous S’hudonni Empire novel, Alien Morning, was a finalist for the John W. Campbell Memorial Award. He lives in Florida.