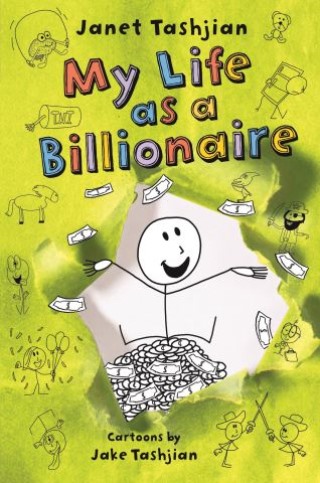 My Life as a Billionaire

Janet and Jake Tashjian’s My Life as a Billionaire is Book 10 in the much-loved, illustrated My Life series.

Derek Fallon won the lottery and now gets to split over a billion dollars with a friend—the buying possibilities are endless—skateboards!, sneakers! video games!, a backyard skateboard park!!!—let the shopping begin. But Derek is soon challenged with new obstacles that he hadn’t thought of before. Having money to spend should make his life easier but it’s bringing with it lots of anxiety. It’s up to Derek to find a balance with his newfound wealth, and to consider the best ways to spend his money.

Janet Tashjian is a middle-grade and young adult novelist who’s been writing books for children for over two decades. Her first novel Tru Confessions was made into a critically acclaimed Disney TV movie starring Clara Bryant and Shia LaBeouf. The Gospel According to Larry series is a cult favorite and Fault Line is taught in many middle and high schools. Her bestselling My Life As a Book series is illustrated by her son, Jake. They also collaborated on the Einstein the Class Hamster series.

Janet collaborated with fellow Macmillan author Laurie Keller on the chapter book series Marty Frye, Private Eye. Janet currently lives in Los Angeles and made her new home city the setting of the Sticker Girl series, which details the adventures of Martina who overcomes being shy with the help of her magical stickers that come to life.