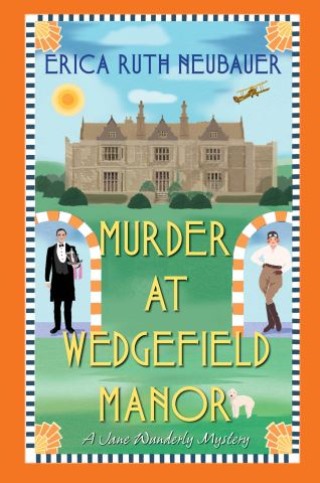 In the wake of World War I, Jane Wunderly—a thoroughly modern young American widow—is traveling abroad, enjoying the hospitality of an English lord and a perfectly proper manor house, until murder makes an unwelcome appearance . . .

England, 1926: Wedgefield Manor, deep in the tranquil Essex countryside, provides a welcome rest stop for Jane and her matchmaking Aunt Millie before their return to America. While Millie spends time with her long-lost daughter, Lillian, and their host, Lord Hughes, Jane fills the hours devouring mystery novels and taking flying lessons—much to Millie’s disapproval. But any danger in the air is eclipsed by tragedy on the ground when one of the estate’s mechanics, Air Force veteran Simon Marshall, is killed in a motorcar collision.

The sliced brake cables prove this was no accident, yet was the intended victim someone other than Simon? The house is full of suspects—visiting relations, secretive servants, strangers prowling the grounds at night—and also full of targets. The enigmatic Mr. Redvers, who helped Jane solve a murder in Egypt, arrives on the scene to once more offer his assistance. It seems that everyone at Wedgefield wants Jane to help protect the Hughes family. But while she searches for answers, is she overlooking a killer hiding in plain sight?

Erica Ruth Neubauer:
Erica Ruth Neubauer spent eleven years in the military, nearly two as a Maryland police officer, and one as a high school English teacher, before finding her way as a writer. She has been a reviewer of mysteries and crime fiction for publications such as Publishers Weekly and Mystery Scene Magazine for several years, and she’s a member of Sisters in Crime and Mystery Writers of America. Erica Ruth lives in Milwaukee, WI.