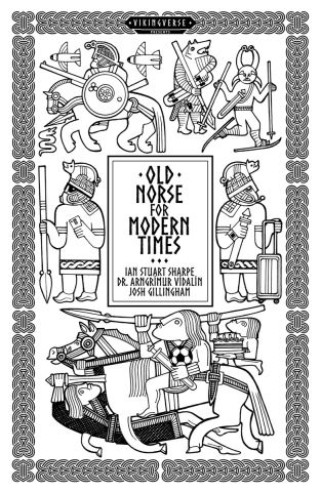 Never be lost for words again...with this book of lost words. Have you ever wanted to wield the silver tongue of Loki, or to hammer home your point like a Thundergod? Old Norse is the language of legends and the stuff of sagas, the inspiration for Tolkien and Marvel, for award-winning manga and epic videogames. It is the language of cleverly crafted kennings, blood-curdling curses, and pithy retorts to RagnarÖk. Old Norse for Modern Times gives you the perfect phrase for every contemporary situation—from memorable movie quotes ("We're going to need a bigger boat." &THORN;urfa munu vÉr skip stÆrra) to battle-cries to yell on Discord ("Do I look to be in a gaming mood?" SÝnisk &thorn;Ér ek vera Í skapi til leika?), from mead hall musings ("This drink, I like it! ANOTHER!" LÍkar mÉr drykkr &thorn;essi! ANNAN!) to tried-and-tested pickup lines ("Nice tattoo!" Fagrt er hÚ&eth;flÚri&eth;"). With over 500 phrases inside (plus the chance to add your own!) it is the perfect guide for Vikings fans, whether they are re-enactors, role-players, or simply in love with Ragnar.

Ian Stuart Sharpe:
Ian Sharpe was born in London, UK, and now lives in British Columbia, Canada. Having worked for the BBC, IMG, Atari, and Electronic Arts, he is now CEO of a tech start up. As a child he discovered his love of books, sci-fi, and sagas: devouring the works of Douglas Adams, J.R.R. Tolkien, Terry Pratchett, and George MacDonald Fraser, alongside Snorri Sturluson and Sigvat the Skald. He once won a prize at school for Outstanding Progress and chose a dictionary as his reward, secretly wishing it had been an Old Norse phrasebook. The All Father Paradox is his first novel.