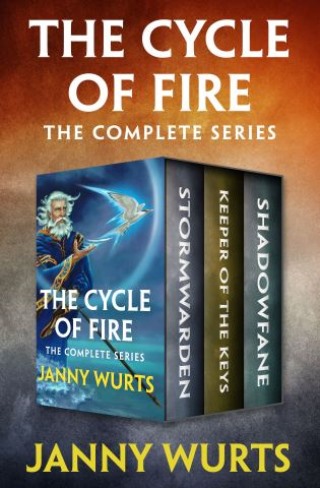 The Cycle of Fire

A young girl, her brother, and a Firelord’s descendant are caught up in the rescue of the Stormwarden Anskiere—and the unbinding of the demons that could destroy all of humanity.

Keeper of the Keys

As Jaric struggles to accept his father’s heritage, Taen’s brother is possessed by the demons who use him as a pawn to hunt down and slay the Firelord’s heir.

Jaric faces the Cycle of Fire that drove his father to madness, while Taen Dreamweaver is targeted by her brother and his demon overlords, psionically endowed aliens who have been revealed as mankind’s ancient conquerors.

“It ought to be illegal for one person to have this much talent.” —Stephen R. Donaldson

Janny Wurts: Janny Wurts is an author and artist who has published nineteen novels, a collection of short fiction nominated for the British Fantasy Award, and numerous science fiction and fantasy short stories. Her books include the Wars of Light and Shadow series; standalone novels To Ride Hell’s Chasm, The Master of Whitestorm, and Sorcerer’s Legacy; the Cycle of Fire trilogy; and the Empire Trilogy written in collaboration with Raymond E. Feist.

Wurts has a painting in the permanent collection of the Delaware Art Museum. Her other artwork has appeared in such venues as NASA’s twenty-fifth anniversary exhibit, the Canton Museum of Art, and the Hayden Planetarium in New York. She has received two Chesley Awards for her work.

​Wurts lives in Florida with three cats and a retrained racehorse, and rides with the mounted team for Peace River K9 Search and Rescue, Inc. For more information, visit www.paravia.com/JannyWurts.