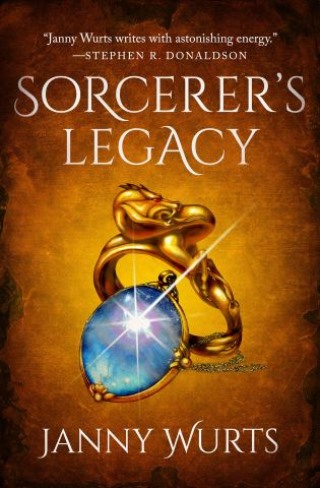 The debut fantasy adventure novel by the author of the Wars of Light and Shadow series is “a wonderful breath of fresh air. . . . Just plain fun” (Fantasy Literature).

With her husband, the Duke of Trathmere, slain in battle, Elienne becomes a captive of the loathsome Prime Inquisitor of the conquering army. Her home is now a prize of war, and Elienne swept aside in the wreckage as chattel—until the Inquisitor vows to bed her as punishment for her defiance.

Locked in a dank cell awaiting her fate, Elienne is visited by a sorcerer, powerful beyond her imagining. Ielond seeks a bride for his prince, a man condemned to death by a council that has deemed him unfit for succession since he cannot father an heir. When Ielond tells Elienne she is carrying her husband’s child, the recent conception offers hope to salvage the throne. To escape the Inquisitor’s cruelty, Elienne agrees to pose her son as the royal heir. But in a battle to thwart black magic and intrigue, her bold heart will remain her own, self‑reliant invention her solitary salvation as malevolent factions coalesce against her . . .

Janny Wurts: Janny Wurts is an author and artist who has published nineteen novels, a collection of short fiction nominated for the British Fantasy Award, and numerous science fiction and fantasy short stories. Her books include the Wars of Light and Shadow series; standalone novels To Ride Hell’s Chasm, The Master of Whitestorm, and Sorcerer’s Legacy; the Cycle of Fire trilogy; and the Empire Trilogy written in collaboration with Raymond E. Feist.

Wurts has a painting in the permanent collection of the Delaware Art Museum. Her other artwork has appeared in such venues as NASA’s twenty-fifth anniversary exhibit, the Canton Museum of Art, and the Hayden Planetarium in New York. She has received two Chesley Awards for her work.

​Wurts lives in Florida with three cats and a retrained racehorse, and rides with the mounted team for Peace River K9 Search and Rescue, Inc. For more information, visit www.paravia.com/JannyWurts.