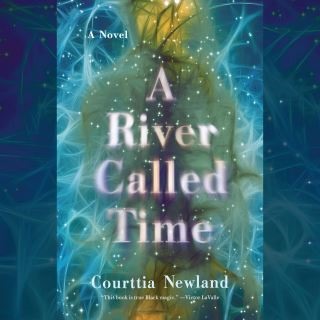 "A River Called Time is a masterful reimagining of the African diaspora's influence on England, and on the world. It's a grand tale and still an intimate portrait of loss and love. What glory and influence would Africa enjoy if colonialism had never occurred? Courttia Newland reshapes our vision of the past, present and future by taking this one question seriously. The result is something truly special. No other way to put it, this book is true Black magic."
—Victor LaValle, author of The Changeling

"Courttia Newland's writing is rich with passion and humanity. He manages to convey great depth without ever losing his lightness of touch. A rare feat only reserved for the few."
—Steve McQueen, Academy Award–winning film director

The Ark was built to save the lives of the many, but rapidly became a refuge for the elite, the entrance closed without warning.

Years after the Ark was cut off from the world—a world much like our own, but in which slavery has never existed—a chance of survival within the Ark's confines is granted to a select few who can prove their worth. Among their number is Markriss Denny, whose path to future excellence is marred only by a closely guarded secret: without warning, his spirit leaves his body, allowing him to see and experience a world far beyond his physical limitations.

Once inside the Ark, Denny learns of another with the same power, whose existence could spell catastrophe for humanity. He is forced into a desperate race to understand his abilities, and in doing so uncovers the truth about the Ark, himself, and the people he thought he once knew.

Courttia Newland: Courttia Newland’s first novel, The Scholar, was published in 1997. Further critically acclaimed work includes Society Within (1999), Snakeskin (2002), The Dying Wish (2006), Music for the Off-Key (2006), and A Book of Blues (2011). He is coeditor of IC3: The Penguin Book of New Black Writing in Britain (2000) and has short stories featured in many anthologies. He was nominated for the International IMPAC Dublin Literary Award, the CWA Dagger in the Library Award, the Alfred Fagon Award, and the Frank O’Connor Award. His latest anthology, coedited with Monique Roffey, is Tell Tales 4: The Global Village.