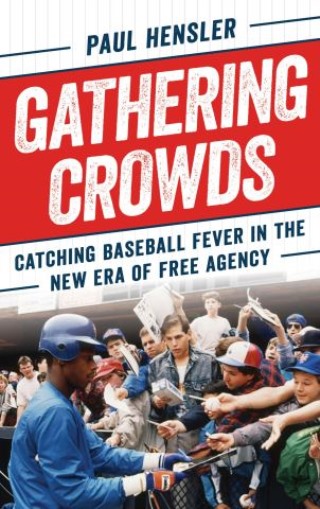 Catching Baseball Fever in the New Era of Free Agency

When baseball’s reserve clause was struck down in late 1975 and ushered in free agency, club owners feared it would ruin the game; instead, there seemed to be no end to the “baseball fever” that would grip America.

In Gathering Crowds: Catching Baseball Fever in the New Era of Free Agency, Paul Hensler details how baseball grew and evolved from the late 1970s through the 1980s. Trepidation that without the reserve clause only wealthy teams would succeed diminished when small-market clubs in Minnesota, Kansas City, and Boston found their way to pennants and World Series titles. The proliferation of games broadcast on cable and satellite systems seemed to create a thirst for more baseball rather than discourage fans from going to the ballpark. And as fans clicked the turnstiles and purchased more and more team-licensed products, the national pastime proved it could survive and thrive even as other professional sports leagues vied for the public’s attention. By the end of the 1980s, baseball had positioned itself to progress into the future stronger and more popular than ever.

Gathering Crowds reveals how the national pastime moved beyond the grasp of the reserve clause to endure a lengthy strike and drug scandals and then prosper as it never had before. The book also offers insight into how societal issues influenced baseball in this new era, from women in the clubhouses and minorities finally named as managers to a gay player’s debut at the big-league level. Gathering Crowds is a fascinating examination of baseball’s transformation during this unprecedented era.

Paul Hensler is a baseball historian and has been a member of the Society for American Baseball Research (SABR) for over thirty years. He is the author of three previous books, including The New Boys of Summer: Baseball’s Radical Transformation in the Late Sixties (Rowman & Littlefield, 2017). Hensler has contributed to numerous SABR publications as well as articles and book reviews for NINE: A Journal of Baseball History and Culture. He has presented at the SABR national convention, the NINE Spring Training Conference, and the Cooperstown Symposium on Baseball and American Culture. A lifelong resident of Connecticut, Paul and his wife live in the town of Ellington. Learn more at www.paulhensler.com.