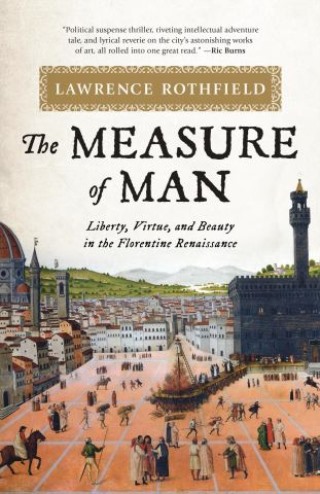 The Measure of Man

Liberty, Virtue, and Beauty in the Florentine Renaissance

It was one of the most concentrated surges of creativity in the history of civilization. Between 1390 and 1537, Florence poured forth an astonishing stream of magnificent artworks. But Florentines did more during this brief period than create masterpieces. As citizens of a fractious republic threatened from below, without, and within, they also were driven to reimagine the political and ethical basis of their world, exploring the meaning and possibilities of liberty, virtue, and beauty.

This vibrant era is brought to life in rich detail by noted historian Lawrence Rothfield in The Measure of Man. His highly readable account introduces readers to a city teeming with memorable individuals and audacious risk-takers, capable of producing works of the most serene beauty and acts of the most shocking violence. Rothfield’s cast of characters includes book hunters and book burners, devout Christians and assassins, humble pharmacists and arrogant oligarchs, all caught up in a dramatic struggle—a tragic arc running from the cultural heights of republican idealism in the early fifteenth century, through the aesthetic flowerings and civic vicissitudes of the age of the Medici and Savonarola, to the brooding meditations of Machiavelli and Michelangelo over the fate of the dying republic.

Lawrence Rothfield has written or edited books on literary realism, the Brooklyn Museum of Art “Sensation” show controversy, music scenes in Chicago, and the looting of the Iraq National Museum. Currently he is working on a documentary about the life and art of outsider artist Ralph Blakelock, America’s van Gogh. He teaches comparative literature at the University of Chicago.