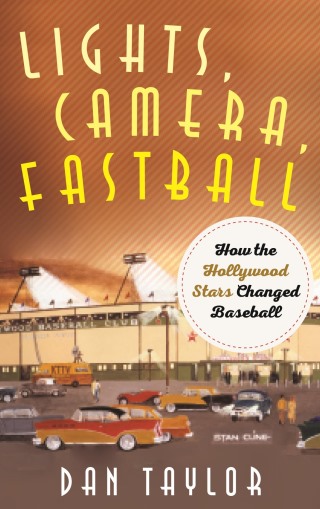 How the Hollywood Stars Changed Baseball

The Hollywood Stars were the most inventive team in baseball history, known for their celebrity ownership and movie star following during the Golden Age of Hollywood.

In Lights, Camera, Fastball: How the Hollywood Stars Changed Baseball, Dan Taylor delivers a fascinating look at the Hollywood Stars and their glorious twenty-year run in the Pacific Coast League. Led by Bob Cobb, owner of the heralded Brown Derby restaurant and known more famously as the creator of the Cobb salad, the Hollywood Stars took professional baseball to a new and innovative level. The team played in short pants, instigated rule changes, employed cheerleaders and movie-star beauty queens, pioneered baseball on television, eschewed trains for planes, and offered fans palatable delicacies not before served at ballparks. On any given night, Clark Gable, Jimmy Stewart, Barbara Stanwyck, Humphrey Bogart, and dozens more cheered on their favorite team from the boxes and grandstands of Gilmore Field.

During the Hollywood Stars’ history, its celebrity owners pushed boundaries, challenged existing baseball norms, infuriated rivals, and produced an imaginative product, the likes of which the game had never before seen. Featuring interviews with former players, Lights, Camera, Fastball is an inside look at a team that was far ahead its time, whose innovations are still seen in professional baseball today.

Dan Taylor is a former award-winning television sportscaster. He is the author of Rise of the Bulldogs, A Scout’s Report: My 70 Years in Baseball, and Fate’s Take-Out Slide in collaboration with George Genovese. Taylor is a member of the Society for American Baseball Research and the Pacific Coast League Historical Society. He resides in Fresno, California.