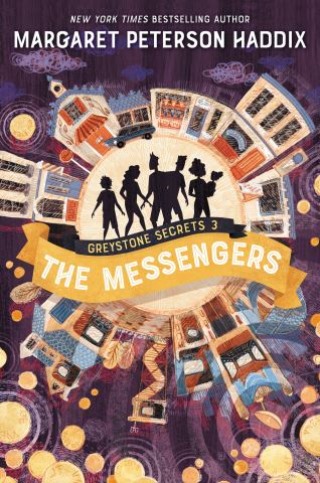 In the dazzling conclusion to the Greystone Secrets series from New York Times bestselling author Margaret Peterson Haddix, the Greystones and their doubles, the Gustanos, must team up to save the alternate world—before both worlds are lost. All secrets are revealed in this page-turning, suspenseful story that shows the importance of teamwork, telling your story, and taking action when it matters most.

As book three of the Greystone Secrets series opens, the Greystone kids have their mother back from the evil alternate world, and so does their friend Natalie. But no one believes the danger is past.

Then mysterious coins begin falling from unexpected places. They are inscribed with codes that look just like what the Greystones’ father was working on before he died. And with the right touch, those symbols transform into words: PLEASE LISTEN. And FIND US, SEE US, HELP US. . . .

The coins are messengers, telling the Greystones and their allies that their friends in the alternate world are under attack—and that the cruel, mind-controlling forces are now invading the better world, too.

After another spinning, sliding journey across worlds, the Greystone kids must solve mysteries that have haunted them since the beginning: what happened when the Gustanos were kidnapped, what created the alternate world, and how a group of mismatched kids can triumph once and for all against an evil force that seems to have total control.

Margaret Peterson Haddix grew up on a farm in Ohio. As a kid, she knew two girls who had the exact same first, middle, and last names and shared the same birthday—only one year apart—and she always thought that was bizarre.

As an adult, Haddix worked as a newspaper reporter and copy editor in Indiana before her first book, Running Out of Time, was published. She has since written more than forty books for kids and teens, including the Greystone Secrets series, the Shadow Children series, the Missing series, the Children of Exile series, and lots of stand-alones. Haddix and her husband, Doug, now live in Columbus, Ohio, where they raised their two kids. You can learn more about her at www.haddixbooks.com.