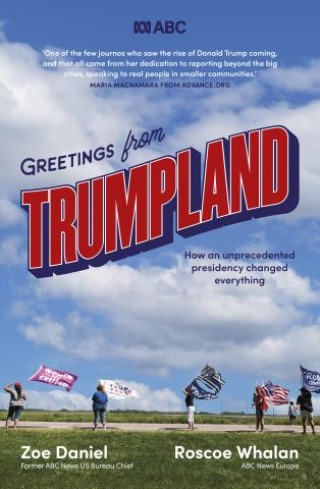 How an unprecedented presidency changed everything

Greetings from Trumpland explores how an unprecedented presidency changed everything.

As we enter a post-Trump era, facts are a matter of opinion, the boundaries of civility have shifted, and populism has re-emerged as a powerful tool for political leaders the world over.

In a masterclass on using anger and fear for political gain, Donald Trump harnessed the power of social media to develop blind devotion among his supporters. Now, in the wake of his election loss to Joe Biden and the violent unrest since, we enter 2021 amid a global health pandemic and an epidemic of information manipulation and social and political division.

How did the reality TV star win over the hearts and minds of so many regular Americans from Ohio to Florida? And how, after four years, does he have more supporters than ever?

Journalists Zoe Daniel and Roscoe Whalan had front-row seats to the unlikely rise of Donald Trump from joke candidate to president - following his movement from the very beginning. From historic summits on the world stage with North Korean dictator Kim Jong-un, to the rusted steel mills of Pennsylvania, the authors were ringside as Donald Trump punched his way through four tumultuous years in the Oval Office.

Through interviews with the 'forgotten people' who elected a renegade anti-politician, to those who felt the wrath of his no-holds-barred leadership, this book is an inside look at the historic one-term presidency that shook up the global order, and an insightful examination into how America, and the world, faces the future.

'One of the few journos who saw the rise of Donald Trump coming, and that all came from her dedication to reporting beyond the big cities, speaking to real people in smaller communities.'

Zoe Daniel is a three-time foreign correspondent and was the ABC bureau chief in Washington DC from 2015 to 2019. Zoe was the ABC's Southeast Asia correspondent, based in Bangkok, from 2010 to 2013, and the Africa correspondent from 2005 to 2007. She has covered politics, conflicts, natural disasters and all manner of news around the world.

Her previous books include Storyteller, a foreign correspondent's memoir like no other, and Angel, a fictional account of the 2013 Philippines Typhoon Haiyan.

She currently lives in Melbourne with her husband, Rowan; their children, Arkie and Pearl; and their golden retriever, Tully.

Roscoe Whalan was the supervising producer at the ABC's Washington bureau from 2015 to 2018, covering the 2016 election and most of Donald Trump's presidency.

Roscoe is now the supervising producer in the ABC's London bureau, coordinating coverage across Europe.

He lives in South London with his wife, Eliza; their newborn son, Albie; and their miniature sausage dog, Frankie.