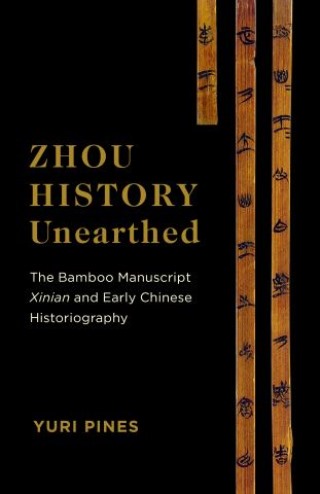 There is a stark contrast between the overarching importance of history writing in imperial China and the meagerness of historical texts from the centuries preceding the imperial unification of 221 BCE. However, recently discovered bamboo manuscripts from the Warring States period (453–221 BCE) have changed this picture, leading to reappraisals of early Chinese historiography. These manuscripts shed new light on questions related to the production, circulation, and audience of historical texts in early China; their different political, ritual, and ideological usages; and their roles in the cultural and intellectual dynamics of China’s vibrant pre-imperial age.

Zhou History Unearthed offers both a novel understanding of early Chinese historiography and a fully annotated translation of Xinian (String of Years), the most notable historical manuscript from the state of Chu. Yuri Pines elucidates the importance of Xinian and other recently discovered texts for our understanding of history writing in Zhou China (1046–255 BCE), as well as major historical events and topics such as Chu’s cultural identity. Pines explores how Xinian challenges existing interpretations of the nature and reliability of canonical historical texts on the Zhou era, such as Zuo zhuan (Zuo Tradition/Commentary) and Records of the Historian (Shiji). A major work of scholarship and translation, Zhou History Unearthed sheds new light on early Chinese history and historiography, demonstrating how new archaeological findings are changing our knowledge of China’s pre-imperial days.

Yuri Pines: Yuri Pines is Michael W. Lipson Professor of Asian Studies at the Hebrew University of Jerusalem. His books include The Book of Lord Shang: Apologetics of State Power in Early China (Columbia, 2017) and The Everlasting Empire: Traditional Chinese Political Culture and Its Enduring Legacy (2012).