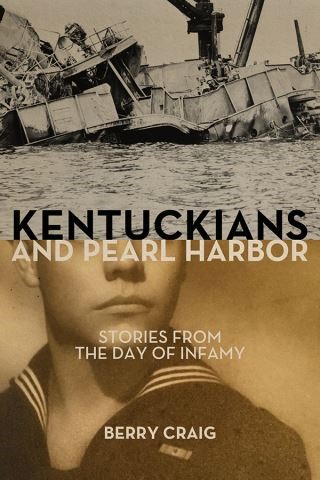 Stories from the Day of Infamy

When the air raid alarm sounded around 7:55 a.m. on December 7, 1941, Gunner's Mate Second Class James Allard Vessels of Paducah was preparing to participate in morning colors aboard the USS Arizona. In the scramble for battle stations, Vessels quickly climbed to a machine gun platform high atop the mainmast as others descended below decks to help pass ammunition up to gunners. At 8:06, a bomb exploded and the Arizona sank. Vessels's lofty perch saved his life, but most of his shipmates were not so lucky.

In Kentuckians and Pearl Harbor, Berry Craig employs an impressive array of newspapers, unpublished memoirs, oral histories, and official military records to offer a ground-up look at the day that Franklin D. Roosevelt said would "live in infamy," and its aftermath in the Bluegrass State. In a series of vignettes, Craig uncovers the untold, forgotten, or little-known stories of ordinary people -- military and civilian -- on the most extraordinary day of their lives. Craig concludes by exploring the home front reaction to this pivotal event in American history.

Japan's surprise attack on Pearl Harbor swept away any illusions Kentuckians had about being able to stay out of World War II. From Paducah to Pikeville, people sprang to action. Their voices emerge and come back to life in this engaging and timely history.

Berry Craig: Berry Craig, emeritus professor of history at West Kentucky Community and Technical College in Paducah, is the author of many books, including Hidden History of Kentucky Soldiers.