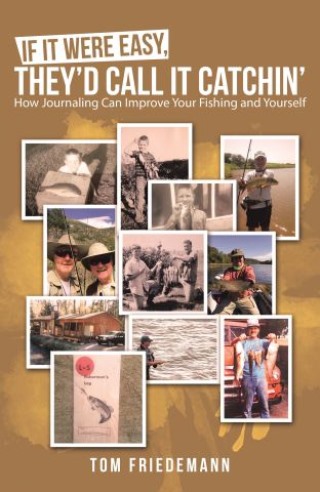 If It Were Easy, They’d Call It Catchin’

How Journaling Can Improve Your Fishing and Yourself

When Tom Friedemann’s thirty-one-year marriage to his high-school sweetheart ended, he was crushed.

But then a fly-fishing buddy gave him a handwritten piece of advice that read, “Just go fishing and everything will be all right.” He followed that advice and found it to be the perfect salve.

In this collection of stories, he celebrates his love affair with fishing and journaling—a journey that began in 1963 in Oklahoma after he caught a 1¾ pound largemouth bass on a red-and-white Martin Fly Plug using a Mitchell 304 spinning reel with a solid glass rod.

That was the beginning of a journey that led to a life of contentment—one that carried him into his seventies and served as an antidote for the challenges he faced in earning a college degree, establishing a career, raising a family, and eventually retiring.

Join the author as he shares how journaling has magnified the satisfaction that comes when one of God’s creatures gives you the ultimate compliment of taking your artificial fly or lure because he thought it was prey.

Tom Friedemann grew up on a farm near Stillwater, Oklahoma, where he developed his love for fishing. Following a forty-nine-year career in public education, he retired and moved to Jones, Oklahoma, just a stone’s throw away from Lake Arcadia. He spends a great deal of time fishing locally and in the streams and rivers near his cabin in Red River, New Mexico.