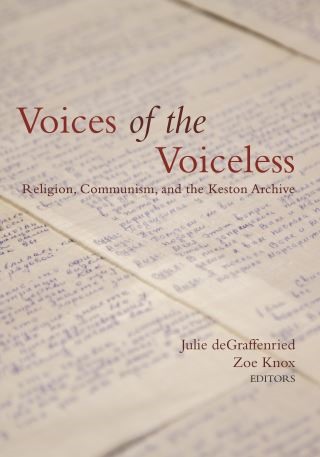 Voices of the Voiceless

Religion, Communism, and the Keston Archive

In 1969, at the height of the Cold War, a group of British Christian researchers and activists, moved by the persecution of believers in the Soviet Union, established an organization dedicated to the study of religion under communism. They had two major goals: to educate the public about religious persecution and to promote academic analysis of religion in communist societies. The organization they founded, eventually named Keston College, amassed an extraordinary collection of primary source and research materials, used by its personnel to document the experiences of persecuted believers in the Soviet bloc and beyond and to publicize human rights violations against believers of all faiths. This formed the basis of a unique collection, called the Keston Archive, now at Baylor University.

Voices of the Voiceless, edited by Julie deGraffenried and Zoe Knox, presents readers with twenty-five essays on a curated selection of images and artifacts from the Keston Archive. Some of the world’s leading authorities on religion and communism as well as experts personally involved with the operation of Keston College carefully selected and provided commentary for these images. The archival material presented in the book offers vivid testimony of this critically important era in the history of religion and of the Cold War.

A guided look into the past,  Voices of the Voiceless reveals the power of what atheist and antireligious regimes sought to silence. This collection documents how believers fought for religious freedom, coped with oppression, and practiced their faith, individually and collectively, in states hostile to religion. It also presents atheist propaganda produced by communist regimes that aimed to marginalize and ultimately eradicate religion. This book offers insights into how faith survived—and even flourished—during one of the most intense antireligious campaigns of the modern era.