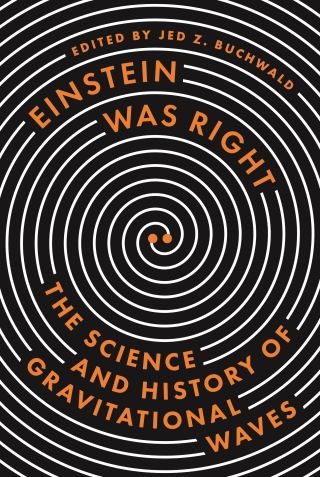 The Science and History of Gravitational Waves

An authoritative interdisciplinary account of the historic discovery of gravitational waves

In 1915, Albert Einstein predicted the existence of gravitational waves—ripples in the fabric of spacetime caused by the movement of large masses—as part of the theory of general relativity. A century later, researchers with the Laser Interferometer Gravitational-Wave Observatory (LIGO) confirmed Einstein's prediction, detecting gravitational waves generated by the collision of two black holes. Shedding new light on the hundred-year history of this momentous achievement, Einstein Was Right brings together essays by two of the physicists who won the Nobel Prize for their instrumental roles in the discovery, along with contributions by leading scholars who offer unparalleled insights into one of the most significant scientific breakthroughs of our time.

This illuminating book features an introduction by Tilman Sauer and invaluable firsthand perspectives on the history and significance of the LIGO consortium by physicists Barry Barish and Kip Thorne. Theoretical physicist Alessandra Buonanno discusses the new possibilities opened by gravitational wave astronomy, and sociologist of science Harry Collins and historians of science Diana Kormos Buchwald, Daniel Kennefick, and Jürgen Renn provide further insights into the history of relativity and LIGO. The book closes with a reflection by philosopher Don Howard on the significance of Einstein's theory for the philosophy of science.

Edited by Jed Buchwald, Einstein Was Right is a compelling and thought-provoking account of one of the most thrilling scientific discoveries of the modern age.