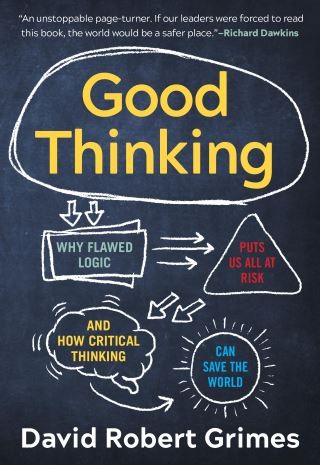 Good Thinking is our best defense against anti-vaccine paranoia, climate denial, and other dire threats of today

Publisher’s Note: Good Thinking was previously published in the UK as The Irrational Ape.

In our ever-more-polarized society, there’s at least one thing we still agree on: The world is overrun with misinformation, faulty logic, and the gullible followers who buy into it all. Of course, we’re not among them—are we?

Scientist David Robert Grimes is on a mission to expose the logical fallacies and cognitive biases that drive our discourse on a dizzying array of topics–from vaccination to abortion, 9/11 conspiracy theories to dictatorial doublespeak, astrology to alternative medicine, and wrongful convictions to racism. But his purpose in Good Thinking isn’t to shame or place blame. Rather, it’s to interrogate our own assumptions–to develop our eye for the glimmer of truth in a vast sea of dubious sources–in short, to think critically.

Grimes’s expert takedown of irrationality is required reading for anyone wondering why bad thinking persists and how we can defeat it. Ultimately, no one changes anyone else’s mind; we can only change our own–and give others the tools to do the same.

David Robert Grimes:
Dr. David Robert Grimes is a physicist, cancer researcher and science journalist. Born in Dublin in 1985, he is affiliated with Dublin City University and University of Oxford. He contributes to both the BBC and RTE discussing science, politics and media and has contributed to The Guardian, The Irish Times, the BBC, PBS, and The New York Times, among others. He also advises on science policy, and was joint recipient of the 2014 Nature/Sense about Science Maddox Prize for Standing Up for Science.