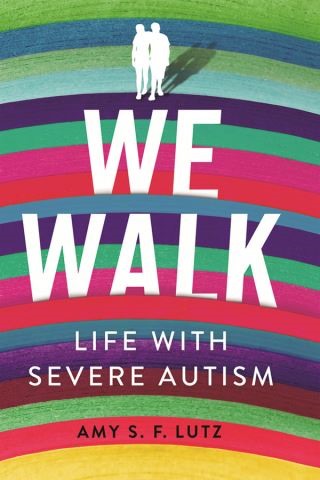 In this collection of beautiful and raw essays, Amy S. F. Lutz writes openly about her experience—the positive and the negative—as a mother of a now twenty-one-year-old son with severe autism. Lutz's human emotion drives through each page and challenges commonly held ideas that define autism either as a disease or as neurodiversity. We Walk is inspired by her own questions: What is the place of intellectually and developmentally disabled people in society? What responsibilities do we, as citizens and human beings, have to one another? Who should decide for those who cannot decide for themselves? What is the meaning of religion to someone with no abstract language? Exploring these questions, We Walk directly—and humanly—examines social issues such as inclusion, religion, therapeutics, and friendship through the lens of severe autism.

In a world where public perception of autism is largely shaped by the "quirky geniuses" featured on television shows like The Big Bang Theory and The Good Doctor, We Walk demands that we center our debates about this disorder on those who are most affected by its impacts.

Amy S. F. Lutz's writing about severe autism has appeared on many platforms, including The Atlantic, Slate, and Psychology Today. She is author of, Each Day I Like It Better, and a founding member of the National Council on Severe Autism. Lutz is a doctoral student at the University of Pennsylvania. She lives outside Philadelphia with her husband and five children. Follow her on Twitter @AmySFLutz.