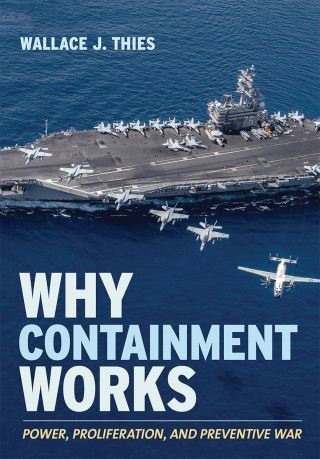 Why Containment Works examines the conduct of American foreign policy during and after the Cold War through the lens of applied policy analysis. Wallace J. Thies argues that the Bush Doctrine after 2002 was a theory of victory—a coherent strategic view that tells a state how best to transform scarce resources into useful military assets, and how to employ those assets in conflicts. He contrasts prescriptions derived from the Bush Doctrine with an alternative theory of victory, one based on containment and deterrence, which US presidents employed for much of the Cold War period. There are, he suggests, multiple reasons for believing that containment was working well against Saddam Hussein's Iraq after the first Gulf War and that there was no need to invade Iraq in 2003.

Thies reexamines five cases of containment drawn from the Cold War and the post-Cold War world. Each example, Thies suggests, offered US officials a choice between reliance on traditional notions of containment and reliance on a more forceful approach. To what extent did reliance on rival theories of victory—containment versus first strike—contribute to a successful outcome? Might these cases have been resolved more quickly, at lower cost, and more favorably to American interests if US officials had chosen a different mix of the coercive and deterrent tools available to them? Thies suggests that the conventional wisdom about containment was often wrong: a superpower like the United States has such vast resources at its disposal that it could easily thwart Libya, Iraq, and Iran by means other than open war.

Wallace J. Thies is Professor Emeritus of Political Science at Catholic University of America. He is author of Why NATO Endures, When Governments Collide, and Friendly Rivals.