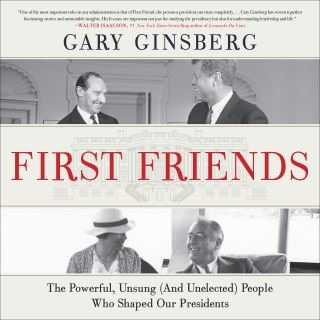 The Powerful, Unsung (And Unelected) People Who Shaped Our Presidents

In the bestselling tradition of The Presidents Club and Presidential Courage, White House history as told through the stories of the best friends and closest confidants of American presidents.

Here are the riveting histories of myriad presidential friendships, among them:

These and other friendships—including Thomas Jefferson and James Madison, Franklin Pierce and Nathaniel Hawthorne, and Bill Clinton and Vernon Jordan—populate this fresh and provocative exploration of a series of seminal presidential friendships.

Publishing history teems with books by and about Presidents, First Ladies, First Pets, and even First Chefs. Now former Clinton aide Gary Ginsberg breaks new literary ground on Pennsylvania Avenue and provides fresh insights into the lives of the men who held the most powerful political office in the world by looking at the friends on whom they relied.

First Friends is an engaging, serendipitous look into the lives of Commanders-in-Chief and how their presidencies were shaped by those they held most dear.

Gary Ginsberg grew up in Buffalo New York, home to two US presidents. A lawyer by training, he has spent his professional career at the intersection of media, politics, and law. He worked for the Clinton administration, was a senior editor and counsel at the political magazine George, and then spent the next two decades in executive positions in media and technology at News Corporation, Time Warner and SoftBank. He has published pieces in the the New York Times and the Wall Street Journal and was an on-air political contributor in the early days of MSNBC. He lives in New York City with his wife and two sons. First Friends is his first book.