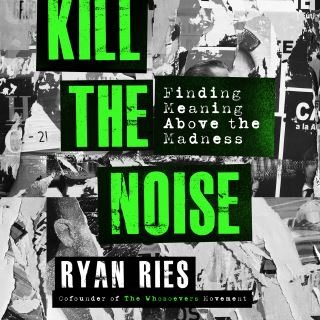 Finding Meaning Above the Madness

It doesn't matter who you are or what you've done—God wants a relationship with you.

Social media, television, video games, drugs, pornography – there is so much noise distracting us from what is important in life that it is nearly impossible to hear God’s truth that He will take you as you are. When we finally kill the noise of the world, we’ll discover in the silence a loving Savior who is waiting to forgive us and offer us a purpose for our lives.

Ryan Ries is living proof of this truth. Growing up in Los Angeles as the son of a mega-church pastor but surrounded by the music, skate, and snowboard industries, Ryan felt a tug-of-war between the church and the world. It was in the skate and music culture that he found his passion and his identity. As a result, he walked away from God and dove head first into the world, losing his way in alcohol, drugs, and sex, which led to anxiety, brokenness, and emptiness.

Kill the Noise tells Ryan’s story about finding God in the messiness of life, and lets you know how you too can find peace, joy, and purpose in Jesus Christ. This book will be a tool to help you kill the noise of the world so you can hear God’s voice telling you that He loves you and that you belong to Him.

Ryan Ries:
Ryan Ries is cofounder of The Whosoevers movement, a nonprofit organization that empowers students at public schools, colleges, and universities around the world to make positive choices no matter their circumstances. Ryan teaches Bible studies at Calvary Chapel Golden Spring, and speaks to thousands of teens and adults at music festivals, concerts, skate parks, churches, juvenile detention centers, and rehabs each year. He produces films, organizes music festivals, and hosts a Saturday night radio talk show, The Ryan Ries Show. Ryan continues to work personally with musicians and action sports athletes. Ryan is married to Crystal, and they have triplet daughters and one son. They live in Southern California.