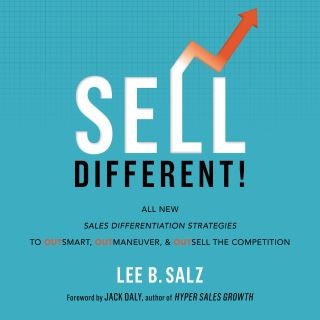 All New Sales Differentiation Strategies to Outsmart, Outmaneuver, and Outsell the Competition

Read by the author.

Game-changing new strategies to outsmart, outmaneuver, and outsell your competition!

Salespeople face fierce competition in their pursuit of winning deals. Differences in product features and functions get smaller by the minute and are not always meaningful to buyers.

How do you stand out from the pack and not just land the account, but win deals at the prices you want?

Lee B. Salz’s previous ground-breaking, bestselling book, Sales Differentiation, armed salespeople with strategies to differentiate both what they sell and how they sell it. Sell Different! provides a new component of Sales Differentiation strategy to help you outsmart, outmaneuver, and outsell the competition to win more deals at the prices you want. This book provides you with the tools you need to land new accounts and grow existing ones.

The practical, proven strategies presented in Sell Different! include:

If you are a salesperson, executive, or business owner who desires to win more deals at the prices you want, then this book is for you.

When salespeople aren’t winning deals at desired levels or price points, executives and business owners turn to Lee B. Salz for help. Lee is a world-renowned sales management strategist and CEO of Sales Architects®. A recognized expert in Sales Differentiation, he specializes in helping salesforces, across all industries, win more deals at the prices you want.

A featured columnist in The Business Journals and a media source on sales and sales management, Lee has been quoted and featured in The Wall Street Journal, CNN, The New York Times, MSNBC, ABC News, and numerous other outlets.  Lee is a frequently-sought keynote speaker and consultant on Sales Differentiation, salesforce development, hiring, onboarding, compensation, and other sales performance topics.

He is the bestselling author of the award-winning, bestselling books Sales Differentiation and Hire Right, Higher Profits.

Lee is a championship powerlifter and a graduate of Binghamton University. Originally from New York City and New Jersey, he now resides in a Minneapolis suburb with his wife, three kids, and two dogs. When he isn't helping his clients win more deals at the prices you want, you will find him on the baseball field coaching his boys.