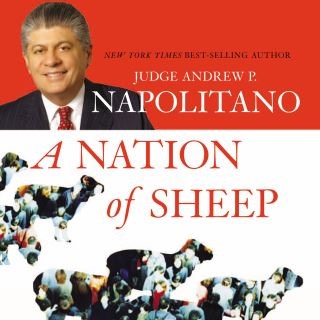 A Nation of Sheep

In A NATION OF SHEEP, Judge Andrew P. Napolitano frankly discusses how the federal government has circumvented the Constitution and is systematically dismantling the rights and freedoms that are the foundation of American democracy.  He challenges Americans to recognize that they are being led down a very dangerous path and that the cost of following without challenge is the loss of the basic freedoms that facilitate our pursuit of happiness and that define us as a nation.

Judge Napolitano reminds readers what America is all about, that the purpose of government is to protect freedom, and freedom is the ability to follow your own free will and not the will of government bureaucrats.  He asks the simple question, which are YOU, a sheep or a wolf?  Do you blindly follow behind where you are led, or do you challenge the government at every pass, forcing it to make decisions that will protect our freedoms?

Judge Napolitano asks the questions that no one else will, challenging readers to rethink why they are blindly following a government that has only its own interests in mind.  He asks:

Andrew P. Napolitano: Judge Andrew P. Napolitano is Fox News Channel's senior judicial analyst, currently seen by millions of viewers weeknights on The Big Story and The O'Reilly Factor. Napolitano is the youngest person in New Jersey history to receive a lifetime judgeship. He is bright (graduate of Princeton and Notre Dame Law School), articulate (four times voted most outstanding professor at the two law schools at which he taught), and broadcast-experienced (as a daily fixture on Fox News Channel since 1998). He is the author of Constitutional Chaos and The Constitution In Exile.