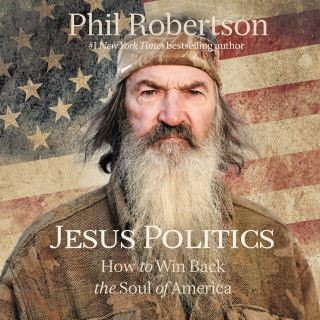 How to Win Back the Soul of America

New York Times bestselling author and Duck Dynasty star Phil Robertson exposes the destructive nature of American politics and calls on Christians to actively participate in advancing the Kingdom of heaven on earth.

We live in an ever-dividing country, a country in which identity politics, creeping socialist policies, and the vast partisan divide threaten the very fabric of America. After decades of political decay and of losing sight of our first principles, the American people are suffering from runaway debt, increased rates of depression, broken families, moral decay, and more. In Jesus Politics, Phil Robertson provides an alternate path: a radical call for Christians to use their freedoms to advance the agenda of the King and win back the soul of America.

Exploring the problems facing our country and how Jesus would respond to each, Robertson offers a manifesto, showing us how to do good by King Jesus, bringing the kingdom of heaven to our homes, neighborhoods, churches, communities, and country. Jesus Politics charges listeners to use their time, talents, resources, influence, and votes to protect and advance the policies of King Jesus. Together, Robertson declares that we can win back the soul of America, becoming a nation that proclaims, "In the King we trust."

Phil Robertson is a professional hunter who invented his own duck call and founded the successful Duck Commander Company. He also starred in the popular television series on A&E, Duck Dynasty, and is now the host of the new subscription television series In the Woods with Phil on BlazeTV.com. He is a New York Times bestselling author of Jesus Politics; The Theft of America's Soul; Happy, Happy, Happy; and UnPHILtered. He and his wife, Kay, live in West Monroe, Louisiana. He has five children, eighteen grandchildren, and seven great-grandchildren.