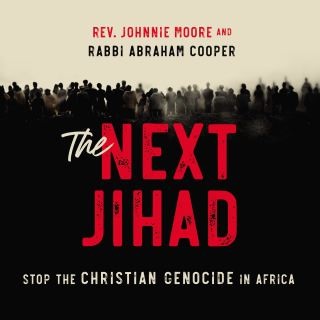 Stop the Christian Genocide in Africa

Drawing from on-the-ground experience and personal testimonials, two of the world’s leading advocates for religious freedom and human rights—one Jewish and one Christian—explain what’s happening to Christians across Africa, why it matters, and what must be done now.

Although news of Christians being killed overseas hits major media outlets from time to time, the news quickly fades away while our fellow believers continue to suffer. Johnnie Moore, as he has done before, wants to awaken the church and American politicians to the daily horrors happening to Christians, focusing this time on Africa.

While the world has been fixated on jihadist threats in the Middle East, terrorists from Nigeria to Kenya have had free reign to massacre on a scale far beyond that of the terrorists in Iraq and Syria. Whole villages have been razed, mothers and children have been grotesquely killed, and an unabashed effort at ethnic cleansing has been embarked upon with unrelenting resolve. Their intention is to rid Africa of its Christians, either by forced conversion to Islam or by destruction and murder.

Moore is writing this book with Rabbi Abraham Cooper, an Orthodox Jew, who is a regular contributor to FOX News and is the associate dean and director of Global Social Action Agenda for the Simon Wiesenthal Center, a leading Jewish human rights organization with more than 400,000 family members. With their many connections in politics and media, as well as their respective faith communities, Moore and Rabbi Cooper will be able to reach a wide audience with this message.

Rev. Johnnie Moore is a noted speaker, author, and human rights activist. He serves as the president of Congress of Christian Leaders and is the founder of The Kairos Company, one of America’s leading boutique communications consultancies. Moore is best known for his extensive multifaith work on the intersection of faith and foreign policy throughout the world, but especially in the Middle East.

Moore has been named one of America’s twenty-five most influential evangelicals, and he is the youngest recipient of the Simon Wiesenthal Center’s prestigious Medal of Valor for his extensive work on behalf of threatened Christians in the Middle East, an honor he shared on the same evening (posthumously) with the late Israeli prime minister Shimon Peres.

Moore serves as a presidential appointee to the United States Commission for International Religious Freedom and sits on many boards, including those of World Help and the National Association of Evangelicals. He also serves on the Anti-Defamation League’s Middle East Task Force and is on the advisory board of the ADL-Aspen Institute’s Civil Society Fellowship. He is a Fellow at the Townsend Institute for Leadership and Counseling at Concordia University Irvine. His undergraduate and graduate studies were in religion at Liberty University.

In 1977 Rabbi Cooper came to Los Angeles to help Rabbi Marvin Hier found the Simon Wiesenthal Center, giving him the remarkable privilege to know and work with Simon Wiesenthal, of blessed memory, for nearly thirty years. Rabbi Cooper has testified before the United Nations (where the Center is an official NGO) in New York and Geneva, presented testimony before the US Senate, the Japanese Diet, the French Parliament, and the OSCE. He is also a founding member of Israel’s Global Forum on Antisemitism.

Rabbi Cooper has his BA and MS from Yeshiva University and a PhD from the Jewish University of America. He is a recipient of Yeshiva University’s Bernard Revel Community Service Leadership Memorial Award and the Orthodox Union’s National Leadership Award. The Newsweek Daily Beast Company has listed Rabbi Cooper, together with Rabbi Hier, as number eight among the “50 Most Influential Rabbis in the United States.”