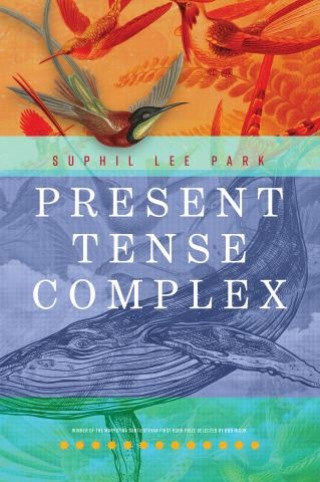 Suphil Lee Park is a bilingual writer who was born and grew up in South Korea. Her name 수 필 리 박 consists of Chinese characters, 秀 筆 李 朴  , each of which means "outstanding," "writing brush," "plum tree," and "silver magnolia." A recent finalist for the Montreal International Poetry Prize, she graduated from New York University with a BA in English and from the University of Texas at Austin with an MFA in Poetry (New Writers Project). Her poems appear in Global Poetry Anthology, Ploughshares, and the Massachusetts Review, among many others.

The poems in this fearless debut, which entangle themes of identity, family, gender, and landscape, are gorgeous, elliptical, and delightfully strange. "Her softening grip of reality. / As if capsized, hull forced into the cold / current, she was out of the blue beautiful. // No more cranes akimbo in the midst of poems / now barren of flowers as hardcore porn. // Still you keep an eye out for the foreshadowing / of their white wings against the floral gore." Suphil Lee Park's transmissions are equal parts lush and violent. Present Tense Complex bridges the beautiful and the grotesque to access a new view of human loneliness.

At times nearly imperiled by the intensity of its music, Present Tense Complex sings a world into being that is both sinister and full of eruptive beauties, that is utterly strange and our own. In these marvelous poems, words are tactile; they percuss and leave ripples as well as cajole and beguile. Not the usual news-crawl or doilies of conventional feeling, readers, this is poetry. What a gift.

From the first phrase of Present Tense Complex, "the tongue of this impulse to race to rest," Suphil Lee Park's poems investigate, tear at, and adore physical and emotional dislocations, separations, and losses. She has a way of combining tones that should never fit together--lush austerity, calm fury--even peaceful unrest. I'd even say that she seems at ease...with unease, in large part because she recognizes her own nature and is not afraid to give her poems over to it: "[e]nter here--where I'm reaching / for my grief as for a first lover's crotch." There is an open struggle with being here, with the frissons she embodies and the vibrations of a self trying to figure out how to resonate with the world. I love this passage, both for itself and how it announces the nature of this mind, this poet: "A different stretch of despite / and because to swim across / lies between any two of us. / Up close, pain / has a lion's share in everything / we deem enduring. / But how short-lipped, the promise / never to name a pain." Suphil Lee Park is anything but short-lipped. For anyone who has recognized the kinship of despite and because, here is your champion.