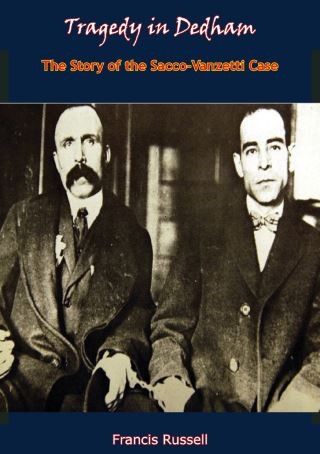 The Story of the Sacco-Vanzetti Case

“Incredibly—after all that has been said—the Sacco and Vanzetti case comes up in a major and moving work. This is probably the best, certainly the most painstaking and panoramic book yet written about America’s tortuous cause celebre. Francis Russell has produced a remarkable reconstruction, full of conflicting personalities and particulars set against a social background of irreconcilable positions, heartfelt passions. Vanzetti, a fishpeddler who read Darwin and Marx, Dante and Renan, and Sacco, a piece worker with wife and children, were both members of a New England anarchist group, and both were Italian immigrants “nameless, in a crowd of nameless ones.” Accused of murdering a South Braintree paymaster and his guard, their subsequent trial, extending over seven years, influenced the spirit of the twenties from Massachusetts to Europe and ignited a courtroom drama unlike anything seen before (a browbeating district attorney, a self-sacrificing lawyer, a rasping judge, the Madeiros’ “confession,” demonstrations, bombings and bombast), only to end in the electric chair for the defendants. It also had its share of double-edged ironies: at a time when anarchists were being secretly liquidated in the Soviet, the Communist International was calling for propagandistic party-line support of the two “martyrs,” and, on the other hand, old Yankee fear of radicalism and revolution was openly prejudicing the jury, thus Sacco and Vanzetti became pawns in the “class struggles” of both sides. As to the author’s verdict: Vanzetti was innocent, Sacco guilty; of this recent ballistic tests leave small doubt. A stunning study.”—Kirkus Reviews