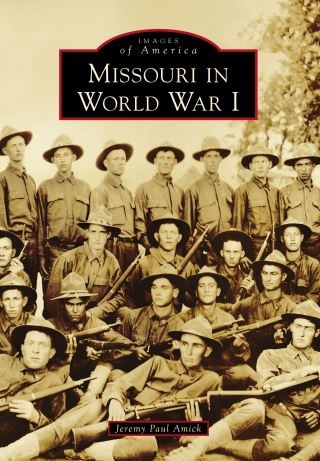 Missouri in World War I

The state of Missouri played a unique role in World War I--as the birthplace of Gen. John J. Pershing, the commanding officer of the American Expeditionary Forces, and Maj. Gen. Enoch Crowder, the primary author of the military draft--and it is an impressive legacy featuring a colorful cast of characters, events, and communities. Missouri was home to two flying aces of the war as well as Bennett Champ Clark, the youngest colonel in the American Expeditionary Forces and the first national commander of the American Legion. During the war, the state was home to farms and ranches that provided an army of mules that assisted Allied forces in hauling critical materials and equipment in the harshest of conditions. Additionally, 156,000 of the state's citizens served in the military with approximately 10,000 wounded or killed in action.

Jeremy Paul Amick: Found in this book are the images demonstrating the history of World War I in the Show-Me State and many of the people and places that helped deliver victory to a war-torn Europe. Jeremy Paul Amick, a former Missouri National Guardsman and military historian/public affairs officer with the Silver Star Families of America, has collected a unique set of photographs illustrating the impact of the Great War on the people of the state of Missouri.