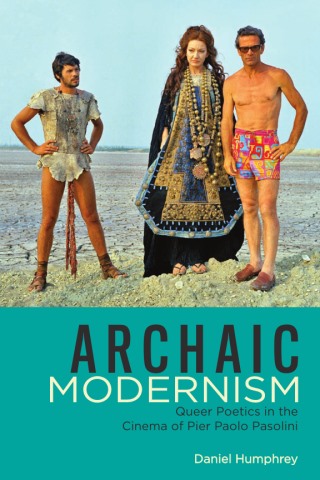 Queer Poetics in the Cinema of Pier Paolo Pasolini

In Archaic Modernism, Daniel Humphrey offers the first book-length, English-language examination of three adaptations of Greek tragedy produced by the gay and Marxist Italian filmmaker Pier Paolo Pasolini: Oedipus Rex (1967), Medea (1969), and Notes Towards an African Orestes (1970/1973). Considering Pasolini’s own theories of a "Cinema of Poetry" alongside Jacques Derrida’s concept of écriture, as well as more recent scholarship by queer theory scholars advocating for an antirelational and antisocial subjectivity, Humphrey maintains that Pasolini’s Greek tragedy films exemplify a paradoxical sense of "archaic modernism" that is at the very heart of the filmmaker’s project. More daringly, he contends that they ultimately reveal the queer roots of Western civilization’s formative texts. Archaic Modernism is comprised of three chapters. Chapter 1 focuses on Oedipus Rex, assessing both the filmic language employed and the deeply queer mythological source material that haunts the tragedy even as it remains largely at a subtextual yet palpable level. Chapter 2 extends and deepens the concept of queer fate and queer negativity in a scene-by-scene analysis of Medea. Chapter 3 looks at the most obscure of Pasolini’s feature length films, Notes Towards an African Orestes, a film long misunderstood as an unwitting failure, but which could perhaps best be understood as a deliberate, sacrificial act on the filmmaker’s part. Considering the film as the third in an informal, maybe unconscious, trilogy, Humphrey concludes his monograph by arguing that this "trilogy of myth" can best be understood as a deconstruction, gradually more and more severe, of three of the most important origin tales of Western civilization. Archaic Modernism makes the case that these three films are as essential as those Pasolini films more often studied in the Anglophone world: Mamma Roma, The Gospel According to Matthew, Teorema, The Trilogy of Life, and Salò, and that they are of continuing, perhaps even increasing, value today. This book is of specific interest to scholars, students, and researchers of film and queer studies.

Daniel Humphrey: Daniel Humphrey is associate professor of film studies and women’s and gender studies as well as the coordinator of the film studies program at Texas A&M University. He is the author of Queer Bergman: Gender, Sexuality and the European Art Film and articles in Criticism, Screen, GLQ, Post Script, Invisible Culture, and elsewhere.