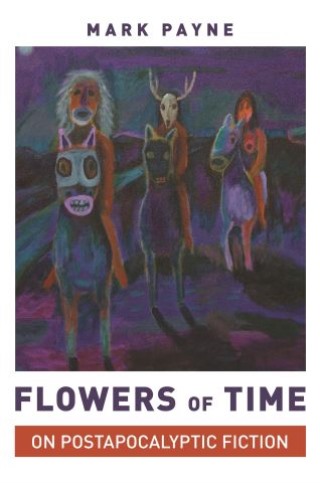 An exploration of postapocalyptic fiction, from antiquity to today, and its connections to political theory and other literary genres

The literary lineage of postapocalyptic fiction—stories set after civilization’s destruction—is a long one, spanning the biblical tale of Noah and Hesiod’s Works and Days to the works of Mary Shelley, Octavia Butler, Cormac McCarthy, and many others. Traveling from antiquity to the present, Flowers of Time reveals how postapocalyptic fiction differs from other genres—pastoral poetry, science fiction, and the maroon narrative—that also explore human capabilities beyond the constraints of civilization. Mark Payne places postapocalyptic fiction into conversation with such theorists as Aristotle, Jean-Jacques Rousseau, Claude Lévi-Strauss, and Carl Schmitt, illustrating how the genre functions as political theory in fictional form.

Payne shows that rather than argue for a particular way of life, postapocalyptic literature reveals what it would be like to inhabit that life. He considers the genre’s appeal in our own historical moment, contending that this fiction is the pastoral of our time. Whereas the pastoralist and the maroon could escape to real-world hills and fashion their own versions of freedom, on a fully owned and occupied Earth, only an apocalyptic event can create a space where such freedoms are feasible once again.

Flowers of Time looks at how fictional narratives set after the world’s devastation represent new conditions and possibilities for life and humanity.

Mark Payne: Mark Payne is the Chester D. Tripp Professor in the Departments of Classics and Comparative Literature, the John U. Nef Committee on Social Thought, and the College at the University of Chicago. His books include Theocritus and the Invention of Fiction, The Animal Part, and Hontology.