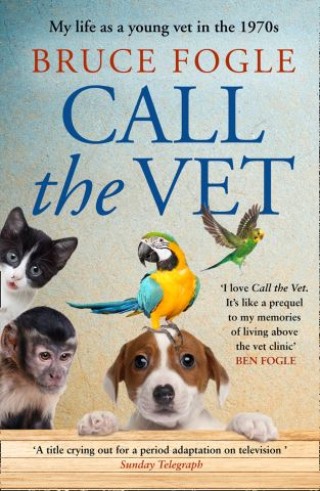 Arriving in 1970s’ London as a fresh-faced Canadian, Bruce Fogle assumed that because he knew the language, he would understand the English. As a graduate of the world’s best veterinary school, he also thought his profession would come naturally to him. He quickly learned not to make assumptions…

Bruce began his career at the prestigious Woodrow & Singleton surgery in the heart of the Knightsbridge. Frequented by Britain’s most distinguished pet owners, from Duchesses and Sultans to Paul McCartney and Elizabeth Taylor, it also cared for the exotic inhabitants of the Harrods’ ‘Zoo Department.’

Over the next few years, an arc of clients would cross Bruce’s table, from cats and dogs to alligators, pumas and even a capuchin monkey. Each adventure taught Bruce far more than any textbook ever could, while skilful veterinary nurses provided the greatest lessons of all.

Call the Vet is a wonderfully rich and warmly funny memoir. Set against the vibrant backdrop of 1970s’ London, it explores the unique bond between pets and their owners; the common thread of compassion that unites all cultures and classes, and the discovery of love and joy in unexpected places.

During his first 20 years in London, Bruce Fogle was best known as husband of the respected actress Julia Foster. For the last 20 years, he has been happily known as father of the writer and broadcaster Ben Fogle. In between he became the world’s best-selling practicing vet, with millions of books published in over 40 languages. Bruce is co-founder of the charity Hearing Dogs for Deaf People and Chair of the animal protection charity Humane Society International. He still works as a vet.