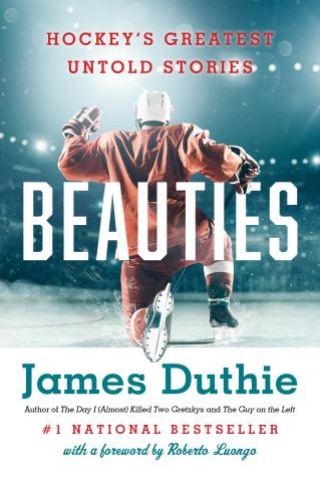 Essential reading for every fan, Beauties is a collection of the best stories that players tell each other. Grab a seat with TSN’s James Duthie as hockey’s finest relive highs, lows and hilarious moments on and off the ice from superstars, journeymen, coaches, referees, broadcasters, agents, and hockey moms and dads. In Beauties, you’ll find out:

·       How Sidney Crosby’s most unusual nickname came to be

·       About the night that Hayley Wickenheiser went blind

JAMES DUTHIE covers hockey as well as the Grey Cup, Super Bowl and the Masters on TSN. Duthie’s entertaining and sharp-witted style make him a fan favourite across Canada and one of the most-followed media personalities on Twitter. His natural charisma and extensive history in sports broadcasting allow him exclusive interviews with some of the biggest stars in sports and entertainment. Duthie’s work has earned him multiple awards, including seven Canadian Screen Awards and the Excellence in Sports Broadcasting award from Sports Media Canada. He is the author of The Day I (Almost) Killed Two Gretzkys and The Guy on the Left. James Duthie lives in Aurora, Ontario.