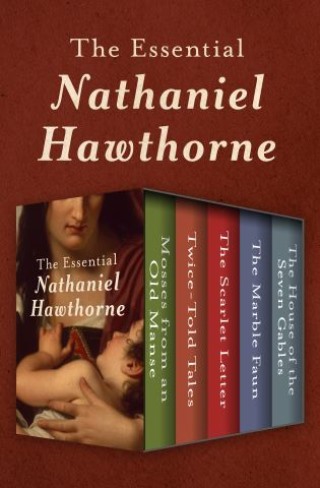 Mosses from an Old Manse, Twice-Told Tales, The Scarlet Letter, The Marble Faun, and The House of the Seven Gables

Including both novels and short story collections, this volume showcases the brilliance of Nathaniel Hawthorne.

Mosses from an Old Manse: A collection of Hawthorne’s short stories, praised by Herman Melville as “his masterpiece.”

Twice-Told Tales: Short fiction that “comes from the hand of a man of genius” (Henry Wadsworth Longfellow).

The Scarlet Letter: This iconic historical novel set in seventeenth-century New England tells the story of Hester Prynne—“among the first and most important female protagonists in American literature”—who is shunned by her Puritan community for committing adultery (NPR).

The Marble Faun: The thrilling tale of three American artists whose search for creative inspiration leads to romance and murder.

The House of the Seven Gables: A family burdened by the sins of their forebears seeks redemption in this gothic masterpiece.

Nathaniel Hawthorne:
Nathaniel Hawthorne (1804–1864) was an American author whose works are notable for their psychological complexity, dark romanticism, and themes of sin and retribution. Born in Salem, Massachusetts, Hawthorne was a descendant of the earliest Puritan settlers, including one of the judges in the Salem witch trials. In addition to The Scarlet Letter, his well-known works include the novel The House of the Seven Gables and the story collection Twice-Told Tales.