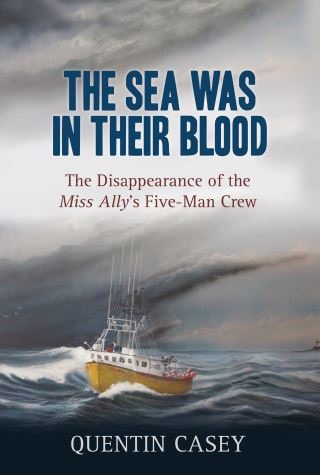 The Sea Was in Their Blood

The Disappearance of the Miss Ally's Five-Man Crew

A journalist and maritime historian investigates the deadly 2013 storm that claimed the lives of five fishermen off the coast of eastern Canada.

It was a frigid night in February 2013 when the five young fishermen vanished. The crew of the Miss Ally—a 12-metre Cape Islander from Woods Harbour, Nova Scotia—was fishing for halibut far off the Nova Scotia coast when their boat’s spotlight malfunctioned. A vicious winter storm was approaching from her south, and all other boats at the fishing grounds were steaming for shore. Unable to locate his longlining gear, the Miss Ally’s young captain decided to stay an extra day to retrieve the gear and, hopefully, a big catch.

The Sea Was in Their Blood explores two key questions: who were the men aboard the Miss Ally, and why were they battered and sunk by a storm forecasted days in advance? Through interviews with the crew’s families and friends, rescue personnel, and members of the tight-knit fishing communities of Woods Harbour and Cape Sable Island, award-winning journalist Quentin Casey pieces together the tragic sinking—including important case details not previously reported—and weaves in the backstories of the Miss Ally’s crew and the lingering effects of their disappearance.

A portion of the royalties from the sale of this book will be donated to various charitable causes associated with the Miss Ally.