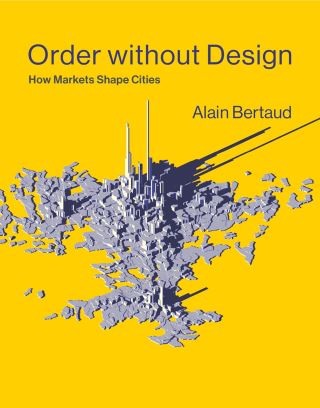 An argument that operational urban planning can be improved by the application of the tools of urban economics to the design of regulations and infrastructure.

Urban planning is a craft learned through practice. Planners make rapid decisions that have an immediate impact on the ground—the width of streets, the minimum size of land parcels, the heights of buildings. The language they use to describe their objectives is qualitative—“sustainable,” “livable,” “resilient”—often with no link to measurable outcomes. Urban economics, on the other hand, is a quantitative science, based on theories, models, and empirical evidence largely developed in academic settings. In this book, the eminent urban planner Alain Bertaud argues that applying the theories of urban economics to the practice of urban planning would greatly improve both the productivity of cities and the welfare of urban citizens.

Bertaud explains that markets provide the indispensable mechanism for cities' development. He cites the experience of cities without markets for land or labor in pre-reform China and Russia; this “urban planners' dream” created inefficiencies and waste. Drawing on five decades of urban planning experience in forty cities around the world, Bertaud links cities' productivity to the size of their labor markets; argues that the design of infrastructure and markets can complement each other; examines the spatial distribution of land prices and densities; stresses the importance of mobility and affordability; and critiques the land use regulations in a number of cities that aim at redesigning existing cities instead of just trying to alleviate clear negative externalities. Bertaud concludes by describing the new role that joint teams of urban planners and economists could play to improve the way cities are managed.

Alain Bertaud: Alain Bertaud is Senior Research Scholar at New York University's Marron Institute of Urban Management. He has worked as Principal Urban Planner for the World Bank and as an independent consultant and resident urban planner in cities ranging from Bangkok to New York.